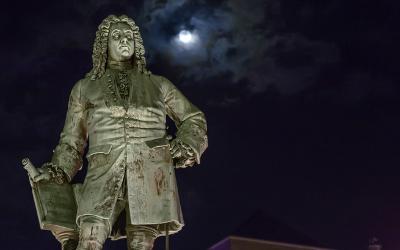 Modern-day audiences will have the chance to hear George Frideric Handel’s work at its best in a new album released worldwide on 19th November 2021, thanks to research by OU Music academics. The album features Handel’s Eight Great Harpsichord Suites, Chaconne in G major and world-first recordings of some of the composer’s finest harpsichord arrangements.

Harpsichordist Bridget Cunningham, Artistic Director of London Early Opera, devised the album to celebrate the 300th anniversary of the first publication of these works in November 1720, as part of her ongoing series of Handel recordings with Signum Classics. Cunningham’s research for the album drew on the ground-breaking work undertaken by Professor Donald Burrows and Dr Helen Coffey for the four volumes George Frideric Handel: Collected Documents, which chart Handel’s life, career and music chronologically through documentary sources, from his upbringing in Germany to his death in London.

Signum Classics are releasing singles from this new album online before its official launch with a harpsichord recital at the Foundling Museum, London, on Friday 19th November 2021. The performance starts at 7 pm and opens the Handel Institute Conference 2021, a three-day celebration of the composer’s life and work. As Chairman of the Handel Institute, Burrows is playing host to events at the conference, and Coffey will chair a session on the influence of Handel’s music in Vienna.

Cunningham, who is currently undertaking a Music PhD at the OU, said:

“This exemplary research, over decades, by OU musicologists Burrows and Coffey has been crucial for historical performance practice and has opened up new paths of research that I can explore and share with my musicians and singers. I’m fortunate to be able to draw upon this incredible knowledge with this album and performance to celebrate the 300th anniversary of these works’ first publication in the 18th century.”

“Our research charts the life and career of one of the world’s most celebrated composers. Still, it’s talented performers such as Cunningham and her colleagues in London Early Opera who bring his music to life.”