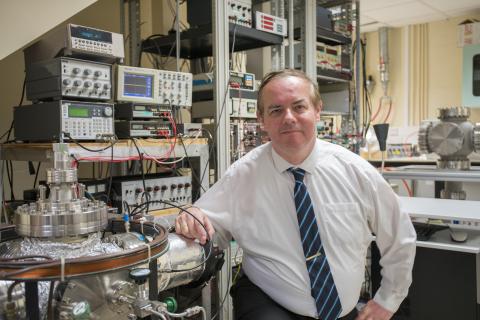 Research by an OU molecular physicist has discovered that electrons can control chemical reactions in experiments leading to purer, cheaper chemical products.

The research, published today (Monday 16 October 2017) in Nature Physics, has discovered electrons displaying their own quantum mechanical nature (ie its state, such as its momentum and position), can induce coherence in other molecules.

Observing these low energy electrons, physicists from both The Open University and Tata Institute of Fundamental Research, Mumbai, have discovered that chemical reactions can be controlled using electrons – rather than lasers, which are currently used – providing a much cheaper alternative to controlling chemical reactions. This has applications in the manufacturing of new chemical products that can be used in industry, including new drugs for cancer therapy and new electronics for computers.

Professor of Molecular Physics in the School of Physical Sciences at The Open University, Nigel Mason, is leading on the research; he said:

“The ability to control chemical reactions is one of the major goals in chemistry; it would enable scientists and the manufacturing industry to reduce production costs and waste by targeting only the chemicals they want. The discovery that an electron rather than a laser can control the process means that this is approach is cheaper and faster.”

The experiments, carried out using a Velocity Map Imaging spectrometer built at the OU, were funded by through a visiting Fellowship of Professor Krishnakumar.

Watch the video to hear what Professor Mason has to say about the significance of this research finding.