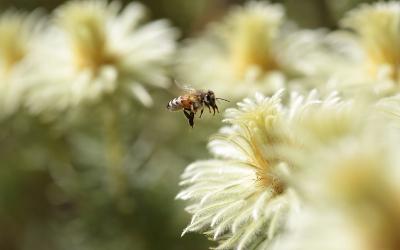 An OU researcher is part of a team which has discovered 100-million-year-old fossil flowers preserved in fossil amber, more commonly known as tree resin.

Professor Robert Spicer, Emeritus Professor in the OU’s School of Environment, Earth and Ecosystem Sciences, leads the OU’s input into this project and is part of an international research team, which has discovered 100-million-year-old fossil flowers preserved in amber, showing that some flowers found living today in South Africa have remained unchanged since the time of the dinosaurs.

The flowers, discovered by experts from the OU, led by Qingdao University, and included the University of Kansas and Nanjing Institute of Geology and Paleontology, are nearly identical to those of modern Phylica species, which are part of the Cape Fynbos flora that is exposed to frequent wildfires.

The fossils were found alongside long-extinct burned plants, pointing to wildfires being an important aspect of early flower evolution.

The sudden appearance of flowering plants as fossils in middle Cretaceous time was described by Charles Darwin as an "abominable mystery" and usually, flower fossils are rare, not well preserved and come from an extinct group of species.

However, this study, published in Nature Plants, found an exception – the research team found flowers, trapped in fossil ambers, that are almost identical to plants living today near Cape Town, South Africa.

“These exquisitely preserved flowers, fruits, leaves and pollen from 100 million years ago provide a snapshot of an important time in the evolution of flowering plants, showing that early flowers were not primitive as many people suppose, but were already superbly adapted to survive the frequent wildfires the ravaged the warm ‘greenhouse’ world of the Cretaceous.

“If Darwin had had access to such fossils his ‘abominable mystery’, as he called the origin of flowering plants, may have been less perplexing as fire was a key component in shaping the evolution of flowers.”

Professor Spicer is also working on the evolution of the Asian monsoon system (which supplies water to around half the world’s population) through the UK Research Institute/ National Science Foundation (of China) Biosphere, Evolution, Transitions and Resilience (BETR) project. His presence in China and high profile there led to the lead author for the fossil flowers project contacting him for his input so that he could look at the fossil collections early in the project and encourage further work, then subsequently add scientific insights into the significance of the finds and in drafting the final manuscript.