Traces of enhanced magnetism used to track crater-formation on Mercury 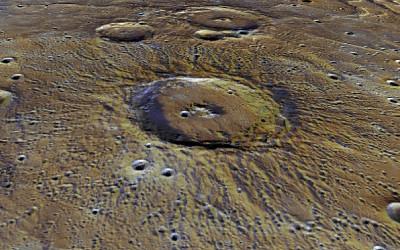 A paper published in Geophysical Research Letters has reported the detection of locally enhanced magnetism, suggestive of unusual iron-rich rocks on Mercury.

They found enhanced magnetism associated with patches of ‘impact melt’, which is once-molten material flung out of each crater during impact. When it solidified, it recorded the effects of the planetary core’s magnetic field, as it was at the time. Because Mercury’s average crust is poor in iron, they speculate that they are detecting the traces of iron-rich impactor that made each crater.

The Open University is leading a project to make geological maps of the whole of Mercury in time for use when the joint European/Japanese BepiColombo starts its orbital mission about the planet in 2026.

Mercury is well-known for having a magnetic field generated in the molten iron of its outer core.  A major goal of the BepiColombo is to probe that field and monitor how it changes. What is less well known, is that some minerals in Mercury’s crust also carry magnetism. This so-called ‘crustal magnetic field’ can be detected only from low altitude and carries information about rocks and crater-forming processes on Mercury that cannot be obtained by other means.

Professor Rothery says “We enjoy collaborating with Valentina, who spent some time with us as a visitor a few years ago. It has been fun getting involved in magnetic studies. In the case of one crater, the magnetic anomalies are displaced sideways, and it seems we can use this to determine the direction from which the impactor arrived. Comparisons between craters helps us to understand how each of them formed.”

Dr Jack Wright said: “I’m really happy that the first three authors of this paper, myself included, are early career researchers gearing up their scientific careers in preparation for the return of the first BepiColombo mission data from Mercury in 2026.”

Find out more about OU research in space