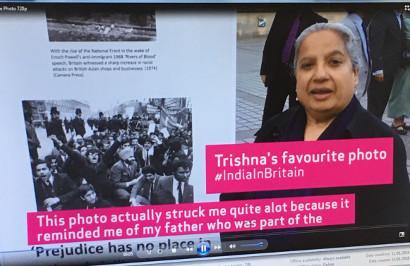 Trishna Singh OBE was born in Glasgow and founded a charity to help empower women and girls. The OU in Scotland @OUScotland is supporting our Year of #Mygration and drew attention to this speech by Trishna Singh, which so touched everyone at their India in Britain exhibition on 22 September 2017 to mark 70 years of independence for India, on her experiences of growing up in a migrant community.

My parents and grandparents came to Great Britain as economic/refugee migrants. They had been forced to leave their land and homes in the wake of Partition. The Bhatras are the earliest Sikh migrants to Britain, their main occupation was door to door selling. They came mainly from two villages: Galotian Kallan and Bhadewala in the northern Punjab region of India which became Pakistan. My father and grandfather were already in the United Kingdom, so my mother and grandmother joined them in 1948.

The ‘India in Britain’ exhibition helps to show that there has been a Sikh community in Scotland for over 70 years. Did you know there around 10,000 Sikhs living in Scotland? There are approximately 4000 Sikhs in Edinburgh.

Both my father and grandfather were at the forefront of the community and were very much involved in developing and setting up the very first Gurdwara (Sikh place of worship) in Scotland in 1958. It was a tenement flat in South Portland Street in the Gorbals that was purchased through donations from the very small number of Sikhs in Glasgow.

As a young girl growing up in Glasgow, my non-Sikh friends made plans to go to college, socialise, work, and talked about what they aspired to do with their lives. We were being taught everything that would make us good wives, daughters-in-law and mothers. We were being home schooled, in cooking, sewing, knitting, and embroidery, unaware that we were being brought up as though we were still living in the villages that our parents had left behind. The need to keep their culture alive through their children, especially the girls, was so strong, it left no room for anything else.

The women who were born into the Bhatra sect of the Sikh faith had always been held back by invisible, internal barriers. By creating Sikh Sanjog in 1989, the first and only organisation in Scotland that would focus on the needs of the women from the Bhatra community, my dream was to help our women gain self-pride, self-improvement and self-confidence so they could have an equal share in society.

When I look back I often wonder what my parents and grandparents would think of their daughter and granddaughter who was so determined to move her community of women to stand alongside their contemporaries from other Asian groups and the white community of women in Scotland, who would go to Glasgow University at the age of 51 and get a degree ... !

… who would then go to Buckingham Palace and be the first Sikh woman to receive an OBE! And who is now standing here at this occasion of 70 years of Indian Independence. One thing I am certain of and that is we are proud to be known as Scottish Sikhs and add to the rich cultural diversity of this country.

I am deeply humbled to be here to share my story with you and also sad that they are not here to witness this. Thank you.