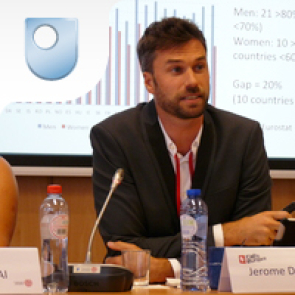 Socio-Economist, with research interests in economics of gender, labour and household economics, fiscal and social policy.

Recently PI in a project for the Women's Budget Group, funded by ITUC (International Trade Union Confederation) on Investing in the Care Economy. Also involved in a project co-funded by FEPS (Foundation for European Progressive Studies) on Beyond austerity, towards employment: a gender aware framewqork.

Chair of the presentation of the module You and your money: personal finance in context (DB123) and member of the module teams for Personal investment in an uncertain world (DB234) and Running the economy (DD209).

Member of the Management Committee and the Policy Advisory Group of the Women's Budget Group, an independent think tank of 200 academics, activists and campaigners whose aim is to analyse gender impacts of economic, fiscal and social policy in the UK and promote gender equality. Topical policy briefings as well as in-depth gender analysis of government budgets and spending announcements are available on the Group's website.

Member of the International Association for Feminist Economics (IAFFE)

Employment and fiscal effects of investing in universal childcare: a macro-micro simulation analysis for the UK (2019)
de Henau, Jérôme
IKD Working Paper No. 83, The Open University