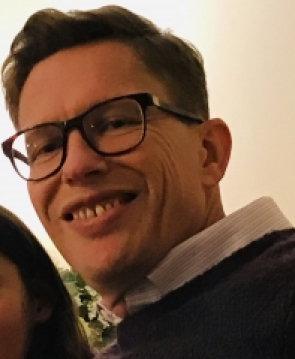 After completing his PhD at Edinburgh (2005), he worked at the University of Victoria (2005-2007) before taking up a position at Goldsmiths, the University of London for a stretch (2007-2014). Mark's first appearance at the OU was as a Research Associate (2016) before moving over to the British Institute in Eastern Africa (2017) and then back again to the OU (2018-2019). Mark is currently a Lecturer in Sustainable Development in DPP (Development Policy & Practice). He is also a member of Innogen.

Mark is currently the Postgraduate Convenor for Development Studies and the Pathway Lead for Development Policy and Practice in the Grand Union Doctoral Training Partnership.

'Male Circumcision in Kenya: bio-medicalisation and masculinity in contemporary culture.'

For a briefing, see http://www.open.ac.uk/research/news/new-research-how-kenyan-communities-view-medical-male-circumcision

This Wellcome Trust funded project aimed to tell the story of Voluntary Medical Male Circumcision (VMMC) for HIV prevention in Kenya. Kenya is only one of 14 other African countries in which this mass surgical campaign was rolled-out since 2007 with the goal of circumcising 20.9 million men by 2016.  The specific historical and cultural contexts of male circumcision in this eastern African country demand our attention if we wish to understand the longer-term implications of this medical intervention upon target communities.

The project grasps VMMC as an artefact of a particular epistemic and organisational turn in the history of AIDS.  Looking at the historical development of medicalised male circumcision for HIV prevention from approximately 1986 to the present is important in several, overlapped ways. Firstly, VMMC is unprecedented as the historically largest public health campaign involving preventative surgery. Secondly, the VMMC approach is consonant with other biomedical HIV prevention measures such as ARVs and PrEP in that biology takes priority over behaviour. Thirdly, the very idea of an approach to containing HIV infections through circumcising millions of African men generated a great deal of controversy and resistance when it was initially proposed. Culture takes on the status of an elephant in the room in such a context, while discussions about human and cultural rights really struggle to get heard. In tandem with significant scientific and bioethical polarisation over the issue of male circumcision, global health governance institutions like WHO (and UNAID) succeded to establish consensus that VMMC would save many lives, a stance that is now

As one of the first historical treatments of VMMC, important questions about race, colonialism, and the various signifiers associated with foreskins emerge in this context. Various surprising connections between White and African masculinities were made during this research including the place of the White circumciser as medical practitioner. The first medicalisation of male circumcision was enacted by white colonial-era missionaries and medical officers. In multiple historical conjunctures, first in the 1920s at the height of colonial outrages around 'female circumcision controversy', Whiteness has shaped genital cutting practices in Kenya. Further historical work on this topic will have to be undertaken before a definitive account can be written.

MUCH to Discover in Mida Creek: creating pathways to community resilience and sustainable development through the maritime cultural landscape in Kenya

MUCH to Discover in Mida Creek is a project that aims to promote community development through engagement with maritime heritage. Located in Mida Creek, in Kilifi County in Kenya, it sought to make value out of Maritime and Underwater Cultural Heritage (MUCH) by helping locals learn about its potential. By developing a number of economic generating community initiatives relating to MUCH, the project has created outstanding ‘living heritage’ activities that are generating far-reaching interest and investment among the locals. Through forest surveys in the Arabuko Sokoke forest, the project has revealed how local communities use and continue to use the natural forest and Creek for settlement and subsistence as well as maritime activities such as boat building.

Within the project, communities have been involved in maritime archaeological research and surveys; the establishment of a Mida Maritime Heritage Interpretive centre in the archaeologically significant Mida Creek; building a dhow-house and fishermen boatyard using locally traditionally available materials; as well as training in ecotourism and climate change mitigation through mangrove reforestation. Additional alternative livelihood initiatives have been developed in the creek, that will not only help local communities but also help conserve the maritime wider cultural and natural landscape.

The project has demonstrated how MUCH (Maritime and Underwater Cultural Heritage) can be used to create pathways to sustainable community development and resilience.

To begin to share their activities, the Biddi na Kazi Women’s Group at Mida Creek have worked with the Documentary Institute of East Africa to co-create an interactive website:

He is currently designing a series of teaching resources on the 'Human Ocean: Communities, Science, and Sustainable Futures'. This is designed to bring students of ocean sciences, marine social sciences, and maritime communities together into collaborative learning.