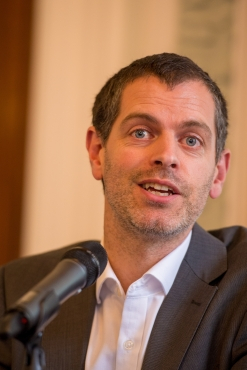 Since May 2021, Simon has been Professor of Politics & International Studies at The Open University. He is also Visiting Research Fellow at the Centre for Britain and Europe, University of Surrey. Previously, Simon has been Deputy Director of the UK in a Changing Europe initiative. With qualifications from UCL, the College of Europe and LSE, he has worked on various aspects of European Union politics for many years, most recently focusing on UK-EU relations and the Brexit process. He is also a National Teaching Fellow, based on his on-going work on active learning and simulation games in the classroom. Simon is Chair of UACES, the UK's European Studies association, from 2021 to 2024.

Simon's research focuses on UK-EU relations and the continuing impact of the EU on British political life. In recent years, he has been funded by the ESRC to study the campaigning in the 2016 referendum on UK membership of the EU, and the negotiations of the subsequent treaties between the two. This builds on longer-standing work on euroscepticism in all its forms.

Since 2020, Simon has been part of PROTECT, a project funded by the European Commission's Horizon2020 programme, which studies the operation of refugee policy across Europe and beyond. He is particularly focused here on the role of civil society organisations and their part in translating governmental policy into on-the-ground activity.

In addition, Simon has also maintained a research interest in active learning and the use of simulation games in higher education. He is co-founder and editor of Active Learning in Political Science, the leading blog of its kind, with a global audience and contributions from a network of colleagues.

Simon's teaching focuses on European politics, especially the structure and operation of the European Union and its relation to member states. He also teaches on negotiation skills and theory.

Simon is very active in engagement activities beyond academia, with an active presence on Twitter, regular blogs and podcasting, as well as numerous media appearances. He has given evidence to Parliament, briefed politicians and civil servants in several European states and participating in many public talks and debates.