“It’s as if you don’t exist, you’re dead financially”: The Lived Reality of the Post-Conviction Confiscation (POCA) Punishment 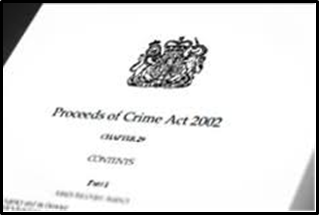 “It’s like a triple punishment with the trauma of being sent to prison and being separated from my kids and then having to deal with this whole proceeds of crime ordeal which brings a whole load of stress and tension, but to then lose your family home on top all seems a little too excessive to me. Can you imagine the guilt I was carrying knowing all the trauma that I have caused my children? If you push people to the edge then they have nothing to lose, do you know what I mean? And that will mean different things to different people, yeh? For some people that might be depression, self-harm and suicide and for others it might mean reoffending, either way it encourages desperation cos you’re in a nothing to lose situation” - Jo

The Proceeds of Crime Act 2002 (POCA hereafter), and the subsequent asset recovery and anti-money laundering legislation which has been introduced since, has over the last two decades left a trail of destruction in its path. Yet it is a hidden punishment, there is no official record of its ongoing use. An FOI in 2018 suggested that 69,151 confiscation orders had been imposed since its inception, this is clearly an under-report of where we are at now in 2022. As Jo reveals above, the lived reality of the post-conviction confiscation punishment is pain, hardship, loss and desperation, it is an un-ending punishment for defendants and their families. How can we make sense of this?

POCA is a financial penalty which enables the courts to recover ‘ill-gotten gains’ accrued via criminality, a principle which most people would support. However, the way in which the law has been drafted, a hybrid of civil and criminal law, allows it to circumnavigate typical due process safeguards and disadvantage the defendant at every stage of the confiscation punishment. It arms the court with extra-ordinary powers and provisions, this can routinely lead to grossly inflated calculations of profit being imposed upon a defendant and their family.

Failure to satisfy these inflated calculations of profit results in a default sentence in prison, yet serving the default sentence does not expunge the debt. Instead this is increasing with interest at 8% while you are in the prison cell, causing further fear, desperation and hopelessness for families on the outside.

These new and extra-ordinary powers are justified on the grounds that they would be used against serious and organised criminals.  Media reports suggest that confiscation agencies are successfully capturing the Mr and Mrs Bigs of the criminal fraternity and slamming them with huge confiscation orders which run into the millions. The reality is much different.

This original and important research suggests, typically, they are used against low to middle level offenders, financially ill-equipped to commission a competent legal defence which would allow them a fighting chance of a fair trial. Then facing an un-ending future of a calculated sum that not only bears no resemblance to money they acquired is impossible to now find and ‘payback’.

“Crime does not pay” …the public were told by Tony Blair, and the POCA legislation was announced as a way to “enhance confidence in the law by demonstrating that nobody is beyond its reach… And we will return to society the assets that have been unlawfully taken”

The architects of the POCA legislation, as with other draconian legislation we have seen (re) emerge in the last two decades, such as joint enterprise, Indeterminate Imprisonment for Public Protection (IPP), and legislation which criminalizes and results in the deportation of foreign national prisoners, were a New Labour government looking to reassert the ‘toughness on crime’.

In this very moment where we see the Labour shadow government once again seeking to outdo the conservatives in promises about being ‘tough on crime’ we must understand what these failed policies mean for tens of thousands of families in the wake of that political rhetoric.

‘Disaster’ legislation in the fight against organised crime.

The reality of POCA, similar to the IPP also introduced by the then Home Secretary David Blunkett, for so many now serving these double punishments might be judged as inhumane and unfair. We must ask similar question to those that have been asked about the un-ending IPP sentences, now regarded in Blunkett’s own words as ‘a disaster’.

You can't live a completely straight life. Its fucking mad. Yeh fucked! I can't have anything around me cos I'm frightened of, err, losing everything that I've worked for, you know, going buying something straight and thinking, sat in the house, that it could be took any second – Marcus.

The importance of further exposing the use of POCA has never been more important.  Asset recovery powers are currently under review by the Law Commission, the worry is that this review will lead to a further strengthening of confiscation powers.

To find out more about the lived reality of POCA join us for an event being held on the 23rd March 2022. Register for this free event here: