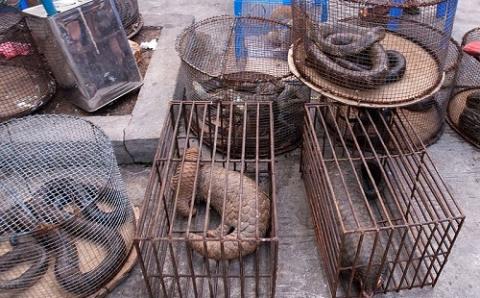 The origin of the recent pandemic of COVID-19 that has affected significantly everybody’s life around the world, has been traced to be most likely Wuhan’s live wildlife market in China. A market, which is used from a minority of rich and powerful individuals in China. What happens in this and similar markets around the world is that alive non-human animals are being stacked for human consumption one on top of the other, which increases the possibility for viruses to pass from one species to another. This was allegedly the case with COVID-19, which passed from a bat to a pangolin before infecting humans.

What is important to understand through Wuhan’s example, however, is that not only in China but around the world’s global capitalist economy, non-human animals and nature in its entirety, are considered simply as ‘resources’ to be used, consumed, exploited and destroyed for profit (Escobar, 1995; White, 2013; Acuña, 2015; Blum, 2018; Brisman et al., 2018). Perceiving the Earth and non-human entities as resources is a result of the dominance of Western frameworks of knowledge over the rest of the world due to colonialism and neo-colonialism; among these frameworks is the economic system of capitalism, which prioritises profit over life (Quijano, 2000; Mignolo, 2011; Vázquez, 2017; Escobar, 2020). Some of the consequences of the dominance of Western ways of thought is not only COVID-19 but also climate change that threatens life on the planet as a whole.

So how did we come to this? You may have heard of ‘cogito ergo sum’ (I think therefore I am). This quote by Descartes is one of the most important Western philosophical quotes and a key pillar of the Enlightenment, which dawned during the 17th century (Mignolo, 2018). Also called as the Age of Reason, the Enlightenment, was associated with European conceptions of science, reason, progress, free-will, order and control (Grosfoguel, 2011; Blum, 2018).   Descartes by privileging the mind came to construct binaries that constituted what it means to be human: human versus nature, reason versus nature (Escobar, 2020). As such, if humankind was distinct from the natural world, then we could in fact treat it as our servant, as a resource to be exploited, as our slave (Blum, 2018). Descartes quote non only marked the beginning of what we term as the modern world in the West but also the start of the Age of the Anthropocene or Anthropocentrism, whereby human life is considered to be the most important form of life; it is superior to nature and other non-human animals, and as such it is seen to be the centre of the world (Klages, 1913; Vázquez, 2017; Mignolo, 2018; Escobar, 2020). The Earth though is not anthropocentric and if we carry on treating it as we have done for the past centuries, it will continue to exist without us, as it has done for billions of years. So could we do something differently?

Cobaria’s quote provides the essence of how many indigenous cultures around the world have viewed the relationship of humans with the Earth: as one of coexistence, connection and complementarity (Kusch, 1970; Mignolo, 2018; Escobar, 2020). Mother Earth is a living spirit to which humans are only one part of its interconnected whole (Klages, 1913). That is why for many of these civilizations the Western binary distinction between humans and nature makes no sense, as everything is interconnected (Kusch, 1970; Escobar, 2020). Even though indigenous knowledges have been actively suppressed, silenced, discredited and almost erased in some cases from colonial and neo-colonial power relations over the past centuries’ and the subsequent dominance of Western frameworks of knowledge (Quijano, 2000; Klages, 1913; Mignolo, 2011; Vázquez, 2017; Escobar, 2018); in recent years some positive developments of resurfacing indigenous knowledges have been taking place. Bolivia and Ecuador for example have passed into their constitution laws which grant all nature equal rights to humans. Perhaps then a more global paradigm shift that draws in indigenous ‘nature wisdom’ is needed if we are to reverse the destructive consequences of our practices over the past centuries.

This blog was originally posted at OpenLearn - https://www.open.edu/openlearn/nature-environment/creative-climate/alternative-perspectives-nature - and is accompanied by a short film at BBC Ideas, https://www.bbc.co.uk/ideas/videos/is-it-time-to-reassess-our-relationship-with-natur/p08l2xcb

Blum, A. (2018) How The Enlightenment Separated Humanity From Nature, Medium. Available at: https://arcdigital.media/how-the-enlightenment-separated-humanity-from-n... (Accessed: 8 July 2020).

Escobar, A. (2018) Designs for the Pluriverse: Radical Interdependence, Autonomy, and the Making of Worlds. Illustrated Edition. Durham: Duke University Press.