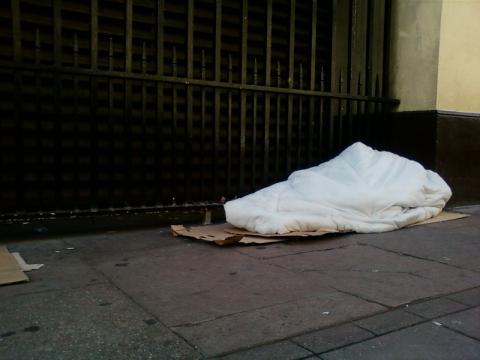 Sharon Hartles was awarded an MA in Crime and Justice (with distinction) from The Open University and is a member of the Harm and Evidence Research Collaborative (HERC).
Dan McCulloch is a Lecturer in Criminology and Social Policy at The Open University.

Preoccupations with Covid-19 have not hindered the Government’s Brexit agenda. In the new world of Brexit, and related to the UK Government’s ongoing hostile environment approach to migration, under new changes to UK immigration rules, from 1st December 2020 the Home Office are entitled in law to expel non- EEA (European Economic Area) nationals who are sleeping rough. From the 1st January 2021 this law also applies to newly-arriving EEA citizens.

With non-UK nationals making up around 26% of the total number of people sleeping rough in England (comparative statistics for other UK nations are not publicly available), this has potential implications for thousands of people who find themselves without a home. In London alone, currently more than half (53%) of rough sleepers are thought to be non-UK nationals.

These new rules represent a further attack on both migrants and on people sleeping rough, but this punitive approach to non-UK nationals who sleep rough is not new. Past experience has evidenced how the UK Border Agency has attempted to remove EU nationals from Britain for simply sleeping rough, under so-called ‘repatriation’ policies. Such measures have been successfully appealed in UK courts previously, but in a context where the UK is no longer an EU member state, the legal situation might differ.

Critics of these changes highlight that they may lead to fewer non-UK nationals who are sleeping rough coming forward for help from charities and local authorities, for fear that they may be deported. As such, the new rules could lead to increased levels of homelessness, as well as exacerbating exploitation of people sleeping rough, and undermining the fight against modern slavery.

To what extent these new UK immigration rules are put into practice remains to be seen. We have already seen some local authorities and charities suggest that they will defy the new rules, with Islington and Haringey; and Southwark councils and more recently Manchester City Council have publicly declared their intention with regards to non-compliance. In an additional act of resistance the Great London Authority has prohibited the sharing of its Combined Homelessness Information Network (CHAIN) database (such swift and such decisive action is arguably warranted given the fact that the Home Office had previously used CHAIN data to target and remove homeless EU nationals). However, only time will tell if they do defy these rules – particularly if they face pressure from central government to comply.

Further, in a letter dated 27th November 2020 signed by 150 MPs, charities, campaigners and lawyers, the Secretary of State was urged to revoke the rules, meaning that non-UK nationals cannot be removed from Britain if found sleeping or bedding down in streets and doorways. Alongside this, a petition calling on the Government to scrap rule changes is gathering momentum.

With decisive supportive action from the UK Government, 2021 could be the year that rough sleeping comes to be treated not as a criminalisation issue, but instead one of compassionate care for some of the most vulnerable people in our society. However, this policy shift suggests that for non-UK nationals who sleep rough, this is unlikely to be the case. Instead, the UK’s long-standing and shameful victimisation of both migrants and people sleeping rough looks set to continue, with non-UK nationals who sleep rough likely to be at the sharpest end of the UK Government’s punitive measures.