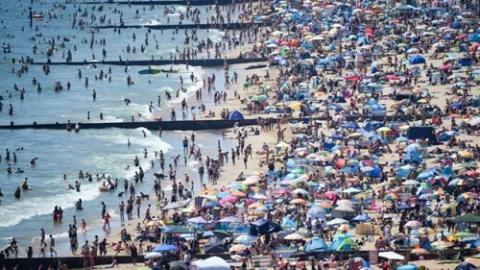 Source: Coronavirus: PM warns over virus rules after beach crowds   The first reported UK death as a result of coronavirus was recorded on 2nd March. It was followed by three hospital deaths the next day – the day of the first Downing Street press briefing, where Boris Johnson said: ‘I was at a hospital the other night where I think there were actually a few coronavirus patients and I shook hands with everybody.’ Johnson would continue shaking hands until at least 9th March when it was confirmed that a fifth person had died. In fact, updated NHS England data indicated that 16 people had died by 9th March, including three on the day Johnson declared that he was still shaking hands.

Then, on 23rd March, Johnson went on to announce what was to become quickly known as the ‘lockdown’ – albeit a misleading euphemism as many had to continue to work, if under far from normal conditions. These were the ‘key’ workers, a group covering not only health, social care and emergency service staff, but also included transport and shop workers, those in the food supply chain, cleaners, postmen and postwomen, refuse collectors, and, albeit less celebrated, workers in construction, security and the diffuse areas of the gig economy. These groups who worked through the ‘lockdown’, mostly in “low-paid, manual jobs”, were, it was revealed in early May by the Office for National Statistics (ONS), up to four times more likely to be killed by exposure to the virus than those in “professional and technical roles”.

Counting the Cost of Coronavirus?

Within three months, by 8th June, the government’s record on the coronavirus was described as “shameful”. In a global context, the UK’s sorry status was reported as follows: 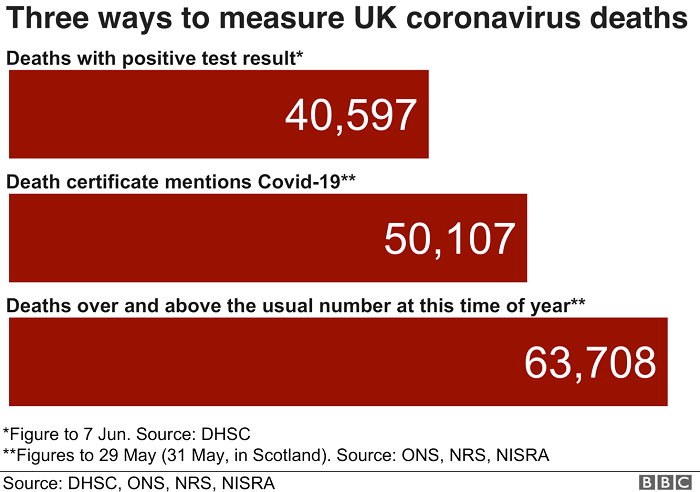 5th in the total number of cases;

4th in terms of deaths per million of the population;

2nd in the total number of deaths;

1st in excess deaths per million of the population.

One week later, on June 16th, the Office for National Statistics revealed that the total number of excess deaths – the statistic that is regarded as the most comprehensive for measuring the impact of a pandemic – had reached 64,500, or 671 a day, dating back to 2nd March.

This gruesome figure for excess deaths does not begin to account for the cancellation of hospital operations for ongoing medical conditions which has added another lethal layer beyond the devastating immediacy of the virus. To take one example: it is estimated that a further 18,000 extra cancer-related deaths could occur over the next year as a result of delays in cancer treatment during the height of the pandemic.

Nor, of course, do stark figures of death say anything about the traumatic desolation experienced by, and the multitude of harms caused to, the anguished families, relatives and friends of the deceased, a toll which is incalculable but increasingly being hidden, ignored and marginalized – except, that is, for the frankly insulting platitude of ‘our hearts go out to all those who have lost loved ones’ message mealy-mouthed by whichever politician happened to draw the short straw to front the Government’s daily press briefing and was thereby obliged to mention the hundreds of deaths the previous day, before moving on, of course, to ‘the next slide’.

Draw a Line and Move on

Exactly one week after the ONS had revealed a total of excess deaths close to 65,000, Johnson, in typically upbeat tone, announced in the Commons the effective end of lockdown in England, dubbed by himself as the end of “our long national hibernation”, and by others as ‘Super Saturday’, or as the UK’s 4th July ‘Independence day’ which the Telegraph had demanded weeks earlier.

Johnson went on to “encourage people to take advantage of the freedoms that they are rightly reacquiring”, wanting to see “people out in the shops—it is a fantastic thing to see. Yes, I want to see people taking advantage of hospitality again—a wonderful thing”. And he urged those in tourism to send out a welcoming signal ​to people from other parts of our country and to roll out the welcome mat, rather than the “Not welcome here” sign. The next day he spent much of Prime Minister’s Questions encouraging MPs from seaside towns to throw open their doors and extend hospitality to visitors.

As he spoke, a mini-heatwave was moving northwards across the UK, accompanied by mass gatherings in parks, resorts and city centres. Some of these resulted in clashes between people and police. The net effect was to generate real fears of social disorder two weeks later, when such gatherings, not least in and around bars, would become quasi-legal. Two days later, on 26th June, it was announced at the Government’s daily coronavirus press conference that it would be the last.

Back to Business and Burying the Dead

But this ‘low’ figure of of 848 weekly deaths, unnoticed as a return to business as usual was being eagerly heralded, has to be placed in the context of more ‘normal’ times and more routine Government priorities. For example, in the year up to September 2019, there were 617 homicides in England and Wales. Or, if the same number of 121 people who died on an average day that week had been killed in a multi-fatality incident – an industrial disaster, plane crash or ‘terrorist attack’ – the cries of outrage would have been deafening. Not with COVID-19, though. The dominant discourse had become, and remains, that it was ‘unprecedented’, a word that appears to cover much – every death toll, every error, every incompetence, every lack of preparedness  – but does not really say anything.

So while 848 people died, this was the week in which the Government sent out signals that the crisis was more or less over. Only local “flare ups” were to be feared should now fully responsibilised citizens fail to act to protect each other by maintaining ‘1 meter-plus’ distancing at work in shops, offices and factories – where possible – or as they drank and ate in bars, restaurants and cafes whilst planning holidays to kick-start the hospitality economy, all the time once again freely moving around and between our cities and towns.

Given this bizarre juxtaposition – still over 100 officially recorded deaths a day in the context of the effective announcement of normality – how were the deaths covered in the broadcasting and print media?

Taking the main news broadcasts on Friday 26th June as a snapshot, there was no coverage at all of the daily death rates on Channel 4 News broadcast between 7 and 8pm.  The BBC’s main news bulletin at 10pm did provide some coverage of the virus, including the daily death rate. This lasted for 34 seconds. In contrast, Liverpool’s Premier League Championship win took up 6 minutes and 20 seconds, 11 times the coverage of the daily death rate. This, in turn, was almost a full minute more than the lead story which concerned the appalling devastation in Yemen where one child was dying every ten minutes due to a combination of war and the virus. So even here the broadcaster still gave more air time to football than to the harrowing and utterly preventable deaths of children.

On ITV’s News at 10, COVID-19 was covered for 1 minute 39 seconds. The programme at least recognised that the 186 deaths was the highest daily increase for 10 days but did also introduce the usual caveats about focussing on the rolling 7-day average rather than looking at one day’s figures. Liverpool’s League Championship win was given twice the coverage, at 3 minutes 22 seconds.

The main headlines on the front pages of the nine national newspapers on the morning of 27th June also contained nothing about the latest number of deaths, but did contain advice for foreign holidays: Green Light for Hols (The Mirror) and Fly Out for Sun, Sea and 70% off (Daily Mail).

Clearly, at this point, we would not claim that these broadcasts and headlines were based on any kind of random sample. However, they do reinforce our argument and suspicion about the government’s shameless desire to move the caravan of death on and to open up the country again, for British business, beer and holidays. Quite literally, in human and media terms, the disposables have been disposed of. Coronavirus death has become normalised.

Several questions become crucial as we are on the brink of the weekend on which ‘lockdown’ is released – albeit as tighter restrictions on work and travel have been re-imposed on Leicester, a city of over half a million and one of the most ethnically diverse in England, facts-on the-ground indicating that there is no real, only a discursive, ‘moving on’.

These questions include: where is the political discussion about the devastating and still unfolding toll of avoidable deaths? Who or what will be held accountable, and how? And, will there be a time when the daily rate of death ever again becomes politically and morally unacceptable and a focus for the media, politicians, the government and the wider population? Or, will the facts around the horrendous levels of preventable deaths, and the long-term devastation wrought by the virus on hundreds of thousands of lives be, in the words of Hannah Arendt  ‘denied and distorted, often covered up by reams of falsehoods or simply allowed to fall into oblivion[?]’

If this happened it would be morally and politically intolerable. However, at this dangerous moment it would not be surprising given the political forces at work in constructing the dominant, consensual narrative that society needs to move on to the promised land of Brexit and to the ideological normality that the UK has a world-beating, track record in every conceivable area – excluding, of course, in preventing COVID-19 deaths.

This blog has been simultaneously published by the Centre for the Study of Crime, Criminalisation and Social Exclusion at Liverpool John Moores University, see https://ccseljmu.wordpress.com/