SNC-Lavalin: Charges to settlement, have lessons been learned? 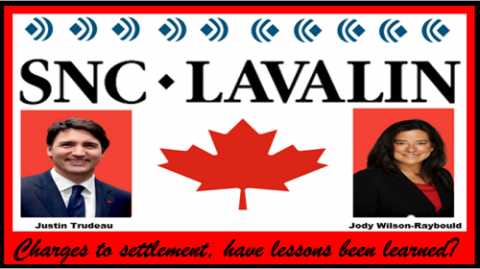 Sharon Hartles was awarded an MA in Crime and Justice (with distinction) from The Open University and is a member of the Harm and Evidence Research Collaborative (HERC).
Liam Miles is a Second Year BA (Hons) Criminology student at Birmingham City University.

On the 19th of February 2015, corruption and fraud charges were filed in the Court of Quebec by the Royal Canadian Mounted Police (RCMP) against SNC-Lavalin and two of its divisions (SNC-Lavalin Construction Inc. and its subsidiary, SNC-Lavalin International Inc.). The alleged criminal acts took place between August 2001 and September 2011 and consisted of an exchange of ‘almost $47.9 million to Libyan government officials to use their positions to influence government decisions’ and defrauding ‘the Libyan government and other entities of “property, money or valuable security or service” worth almost $129.8 million.’  According to a statement released by RCMP, the then Assistant Commissioner Gilles Michaud, “The charges laid today demonstrate how the RCMP continues to support Canada’s international commitments and safeguard its integrity and reputation,” It will come as no surprise to note that the charges and statement were met with a counter public statement issued by SNC-Lavalin in which it declared the charges to be without merit.

The potential harm and wider-reaching ramifications which a guilty verdict would have incurred should not be understated. If SNC-Lavalin Group were to have been convicted of offences under the Canadian Criminal Code (or under these acts: Competition Act, Controlled Drugs and Substance Act, Corruption of Foreign Officials Act, Excise Tax Act, Financial Administration Act, Income Tax Act, Lobbying Act) they would have been ineligible to compete for federal contracts for ten years. In line with the Integrity framework regime which was introduced in 2015, a government–wide ban prohibits federal departments from doing business for a period of 10 years with companies who have engaged in improper conduct. This 10 year ban is in place to ensure the Canadian government does business only with ethical suppliers in Canada and abroad.

In 2018, SNC-Lavalin was ranked Canada’s top contractor, for the third consecutive year, generating around US$9.8 billion in revenue. Such an assertion is supported by SNC-Lavalin’s annual reports financial highlights for  2019, 2018, 2017, 2016 and  2015. On its 2015 report as at 31st December, SNC-Lavalin declared a figure of 36,754, as the number of people employed, of which around 9,000 of these reside in Canada. With this in mind, it is clearer to comprehend the potential global harm a conviction outcome would have set in motion and therefore why this may have been deemed not to be in the best interests of the Canadian government. With that noted an alternative arrangement to a 10 year ban had to be devised.

A solution presented itself in the form of a remediation agreement, also known as a deferred prosecution agreement (DPA) which defers or suspends criminal charges. However, in 2015, when the charges were filed against SNC-Lavalin Group remediation agreements did not exist within Canadian law. Taking that into account, in 2016 SNC-Lavalin successfully lobbied government officials, and the direct result was that as part of the 2018 federal budget, Canada’s Criminal Code was amended to encompass the newly adopted DPA regime for corporate wrongdoing in Canada. This truth cannot be dismissed because it is reinforced in the report published in August 2019, by the Conflict of Interest and Ethics Commissioner Mario Dion: Ethics Commissioner’s report on Justin Trudeau and the SNC-Lavalin scandal.

The Dion Ethics Report sheds light on the political interference which surrounded the issuing of a DPA for SNC-Lavalin Group. Jody Wilson-Raybould, Minister of the Attorney General (2015–2019) stood before the Justice Committee on the 27th February 2019, and stated that between September and December 2018, she “experienced a consistent and sustained effort by many people within the government to seek to politically interfere in the exercise of prosecutorial discretion in my role as the attorney general of Canada in an inappropriate effort to secure a deferred prosecution agreement (DPA) with SNC Lavalin”.

According to the Dion report findings, the Prime Minister of Canada Justin Trudeau (2015 – present) and members of his party had breached section 9 of the Conflict of Interest Act. This conclusion was reached with evidence that detailed how the former clerk to the Privy Council Michael Wernick, (2016- 2019) allegedly telephoned Jody Wilson-Raybould on the 19th December 2018 and stated “The Prime Minister wants to be able to say that he has tried everything he can within the legitimate tool box, so he is quite determined, quite firm, but wants to know why the DPA route which parliament provided for isn’t being used”. The Conflict of Interest and Ethics Commissioner Mario Dion concluded that Justin Trudeau made attempts to influence the Attorney General’s Department to politically steer the case against SNC-Lavalin to see a remediation agreement achieved. In his defence, Justin Trudeau maintained that he was looking to protect Canadian jobs after the company warned a conviction at trial risked damaging its business.

What is of interest is that in November 2018, SNC-Lavalin was categorised in the top 27% of all companies registered in the Corporate Political Engagement Index as being a key government stakeholder and donator to the Trudeau administration. Since the genesis of the prosecution case against SNC-Lavalin in 2017, the company exerted a very broad lobbying effort to secure legal and political assistance. Such assistance extended beyond the lobbying of numerous staff within the Prime Minister’s Office (and the Prime Minister himself) and went as far as the Ministers from the Departments of Finance, International Trade, Innovation, Science and Economic development. In the words of criminologist John Muncie in his work titled Decriminalising Criminology this may evidence ‘the legal transgressions routinely employed by those wielding political and economic power and their ability to deny or conceal the harms they unleash under the protection of the law.’

On the 18th December 2019, SNC-Lavalin pleaded guilty to fraud over its Libyan activities. Its construction division pleaded guilty to a single count of fraud. All other charges were withdrawn in the settlement. The outcome of which was a probation order and a fine amounting to C$280m ($213m; £163m) to be paid over five years and a three-year probation order. SNC-Lavalin stated:

In the aftermath of the SNC-Lavalin and the political scandal, damage has been done. On the one hand, by midday, the date the settlement of criminal charges was imposed, trading had resumed and SNC-Lavalin shares jumped 20 per cent to C$29.01. On the other hand, SNC-Lavalin reported a 6% drop in revenue during the first six months of 2019 to US$3.5bn from US$3.8bn in the corresponding period. This drop in revenue is a side-effect of what Ian Edwards (who was promoted to the post of interim president and chief executive officer of SNC-Lavalin from the 11th June 2019) referred to as a ‘really tough quarter’. Furthermore, data generated by the 2019 Transparency International index of global corruption, indicates that Canada has slipped and now ranks 12th on the list of 180 countries assessed. This is a decrease of three places compared to the 2018 index.

SNC-Lavalin avoided being barred from applying for lucrative federal contracts, meaning it has been able to return to generating billions in profit and billions in revenue. There is no disputing that SNC-Lavalin is one of the world’s largest engineering and construction companies and in line with its Annual Report 2019, as at 31st December 2019, it employed 47,000 people around the world. Having said that, this provides a broader understanding of SNC-Lavalin’s impact within an economic and social context and why it has a duty to enhance society. By investing in Corporate Social Responsibility and implementing this into practice, corporate citizenship can benefit society whilst simultaneously boosting companies reputations. To safeguard its world-wide workforce it is essential SNC-Lavalin be mindful of the consequences of its future profiteering endeavors. … Only time will tell if lessons have been learned and if SNC-Lavalin has truly drawn a line under its corporate-wrongdoing.

This article was originally published by the British Society of Criminology on 9 June 2020.