In this article, Sharon Hartles reflects upon the significant impacts of avoidable harms that have been perpetuated for decades as a result of medical negligence on behalf of the regulator (Committee on Safety of Medicines) that advised the UK Licensing Authority on the safety of medicines and the manufacturer of Epilim (Sanofi). Sharon Hartles is a member of the Open University’s Harm and Evidence Research Collaborative. 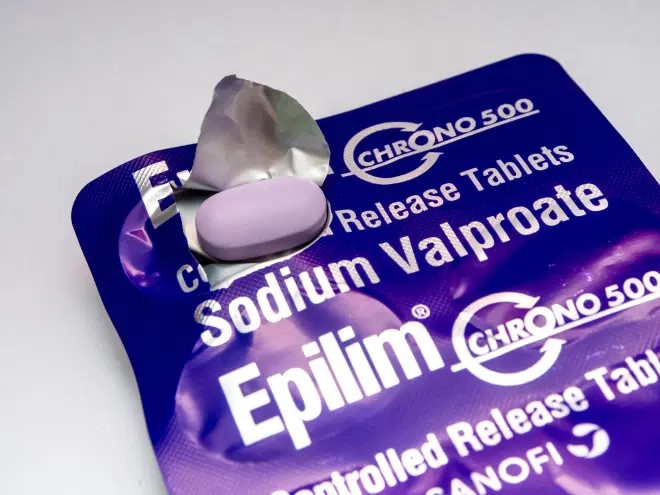 Sodium valproate, marketed as Epilim in the UK, has been linked to physical, developmental and neurological harms in the human fetus.

In the UK, Epilim is the dominant sodium valproate medication used to treat patients at risk of epilepsy associated convulsions. Epilim is an effective anti-convulsant medicine (epilepsy drug) and for this reason it has been licensed for usage since 1973. However, Epilim is also a teratogen; thus exposure to this drug causes an increased risk of physical, developmental and neurological harms in the human embryo or fetus.

Given the fact that sodium valproate is harmful, wherever possible it clearly should not be prescribed to female patients of childbearing age.  Despite this, the regulators and Sanofi, the company responsible for manufacturing and marketing Epilim (Sanofi acquired the company from Reckitt-Labaz in or around 1980) chose to keep patients in the dark for decades and did not disclose the known associations. As a consequence, patients were unable to make informed choices, which has resulted in the preventable fetal valproate syndrome tragedy.

According to The independent Medicines and Medical Devices Safety Review, congenital birth defects associated with in utero exposure to sodium valproate include:

Fetal valproate syndrome harms are widely accepted within the clinical and regulatory community, including by: the National Institute for Health and Clinical Excellence (NICE), the Medicines and Healthcare products Regulatory Agency (MHRA) and the European Medicines Agency (EMA).

During the 1960s and 1970s, articles were published drawing attention to the concerns about the teratogenicity and anti-epileptic (anti-convulsant) medication this included research by: Lawrence, 1963, Janz and Fuchs 1964, Meadow 1968, Speidel and Meadow 1972,  Lowe, 1973, Fedrick 1973, Hill 1974, Barr, 1974 and Hanson and Smith 1975. Yet, despite the known harms, documents uncovered from The National Archives revealed that in 1973, the Committee on Safety of Medicines (a precursor to the  Medicines & Healthcare products Regulatory Agency) thought it best not to make patients aware of the dangers because “it could give rise to fruitless anxiety”.

The controversy surrounding the abhorrent failure to communicate the preventable risks to clinicians and patients was evidenced again because by the early 1980s the regulator and manufacturer was in possession of sufficient information to conclude that Epilim increased the risk of congenital abnormalities. Even though the links between the exposure to sodium valproate and the increased risk of harms to a fetus were well-documented, patients were not informed directly of the link until 2005. In some cases care pathways for women of child-bearing age were not established until 2016. In February 2018, the European Medicines Agency put in measures to avoid valproate exposure in pregnancy. 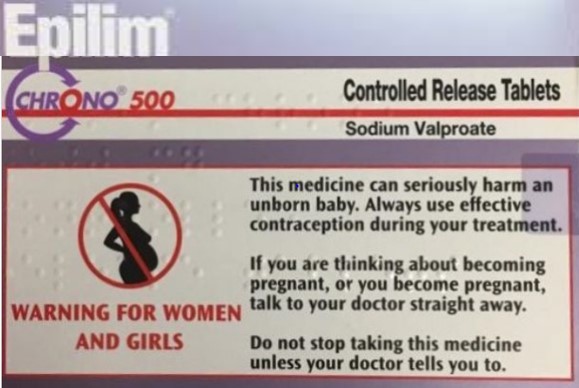 A visual warning of the pregnancy risks (in the form of text) with other warning symbol on the outer carton.

The fetal valproate syndrome tragedy (medical negligence) was entirely avoidable, resulting from a regulation failure and decades of inaction by successive governments to safeguard patients. The true number of individuals’ harmed by sodium valproate in utero since it was licensed in 1973 in the UK is unknown, however, the consensus estimate is around 20,000.  More recent evidence suggests that the medical problems associated with fetal valproate syndrome may be passed down the generations.

Those affected by fetal valproate syndrome have paid the highest price for the regulator and the manufacturer’s negligence and will continue to do so. In the words of a member of the Organisation for Anti-Convulsant Syndrome (OACS Charity):

her when she’s gone, this is the result of Valproate, no parent

wants to see their child slowly die in front of them’.

The role that the regulator and the manufacturer Sanofi have played in creating and perpetuating this tragedy is evident, therefore financial redress should be paid to all those affected by fetal valproate syndrome.

Currently, 27,000 women of child bearing age are taking valproate in the UK. On 2nd March 2021, in the House of Lords, James O’Shaughnessy, Vice-chair for the All-Party Parliamentary Group for First Do No Harm, reported that since June 2020, 150 babies had been born suffering harms due to sodium valproate exposure. Therefore it is imperative that the Government find ways to minimise the risk of harms to future babies. Beyond this, lessons must be learned and mechanisms put into place to ensure avoidable systemic failures on this scale do not happen again.

There are a number of places throughout the UK and globally which offer general advice and support to individuals and family members affected by fetal valproate syndrome harms. These include:

APESAC – Association of Parents of Children with the Syndrome Anti-Convulsant, France