Vagrancy Act 1824: Consign it to history! 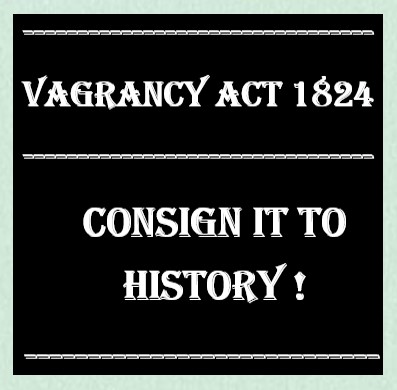 In this article, Sharon Hartles critically discusses how the Vagrancy Act 1824 has been implemented to target and criminalise the most vulnerable members of society. In doing so, she sheds light on why almost 200 years after its enactment, this piece of legislation must be repealed. Sharon Hartles is a member of the Open University’s Harm and Evidence Research Collaborative.

Since its enactment, the Vagrancy Act 1824 has been controversial. This piece of legislation was constructed to specifically target the most vulnerable members of society. Wounded soldiers, who returned from the Napoleonic Wars, and found themselves homeless, jobless and penniless, were relabelled as ‘rogues and vagabonds’ and charged for exposing their wounds and deformities as a means to ‘obtain or gather alms’. Under the guise of social order, solders were criminalised for merely trying to survive; in a country that abandoned them after sending them to war to protect it.

Throughout the past two centuries, this antiquated law has entitled state actors to specifically target the actions and behaviours of certain groups of people. For this reason, attention has been drawn away from the ‘marginalising’ and ‘othering’ of rough sleepers which has been lawfully enforced in plain sight. Such a process has served to maintain a culture of blame and stigmatise those less fortunate. As a result, the role that inequality and entrenched structural violence plays has not always been at the forefront of mainstream media, public or political interest.

The Southern African Litigation Centre No Justice Report befittingly states: ‘The development of English vagrancy laws was by no means an objective or democratic exercise. Essentially, vagrancy laws amounted to the exercise of control over a marginalised group in society by a more privileged class, primarily for its own interests and based on its own notions of the bounds of appropriate social behaviour.’

The action of begging (section 3) and the action of rough sleeping (section 4) are criminal offences under the Vagrancy Act 1824. There were 926 prosecutions and 742 convictions for begging in 2019; and 183 prosecutions and 140 convictions for rough sleeping (see table below). The sentences for these ‘crimes’ ranged from fines, conditional discharge and custody. In addition to this, there are no formal records to show the number of times that the Vagrancy Act was asserted informally in 2019 to move individuals on, or to challenge their behaviours. 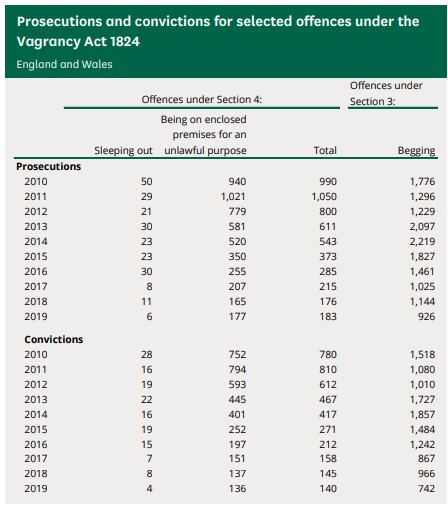 In Northern Ireland, there were 83 prosecutions resulting in 45 convictions under the Vagrancy Act since 2015, according to an article published by the Belfast Telegraph, on 13th February 2021. Public outcry, together with growing pressure against punishing and criminalising homelessness has paved the way for Northern Ireland’s Justice Minister Naomi Long, to indicate her openness towards repealing this draconian piece of legislation.

Northern Ireland isn’t the only nation to be reconsidering the use of the Vagrancy Act, though. Aside from Scotland, which repealed the Vagrancy Act 1982, this Dickensian law has remained in force in other parts of the UK. Almost 40 years later, in England and Wales, a Bill to repeal this outdated and draconian law, is at the early stage of its passage through parliament. On 13th April 2021, a meeting took place in Westminster Hall to debate the consideration of repealing the Act and the subsequent legislation to replace it.

The continued enforcement of a 19th century law in the 21st century is unnecessary, and there are countless occasions evidenced to catalogue its contemptible misuse. For example, in February 2016, non-uniformed officers targeted beggars as part of a long-running crackdown and arrested 62 people. Asking for a few pence resulted in imposed fines which only served to increase the financial burden on rough sleepers. In addition, in November 2017, a child threw £2 into a rough sleeper’s sleeping bag. Despite the fact that no money had been asked for, the rough sleeper was arrested and fined £100 for ‘begging’. More infamously, the misuse of powers afforded to enforce the Vagrancy Act was catapulted in the public domain in 2018. Ahead of the royal weddings, homeless people were moved off the streets in Windsor. Moreover, during this time, there were calls for the Thames Valley Police and the PCC to take action against those begging.

Just shy of 200 years old, it is clear that the wrath of the Vagrancy law 1824 has always been firmly focused on punishing the poor. There is little doubt that this law, in the words of Housing Secretary, Robert Jenrick, should be “consigned to history”. Short term fixes are not fit for purpose and need to be replaced with long term solutions. All future legislation which replaces the Vagrancy Act 1824 must move permanently away from a crime control approach that criminalises marginalised people. Instead it is essential that a compassionate approach is fostered which is centred on resolving and tackling the causes of homelessness; and promoting support and housing.