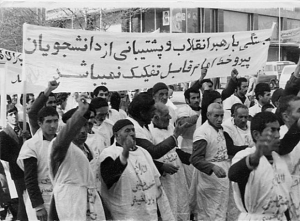 The BBC Persian Service is one of the oldest language services in the organisation. This strand of the project aimed to explore the public diplomacy role, both historical and contemporary, of the BBC World Service (BBCWS) in mediating relations between Iran, Britain and the world.

It aimed to explore how the BBC functions as a cultural contact zone, what the diasporic experiences of Iranian nationals employed by the BBCWS are, and how they negotiate the twin demands of affiliation to both old and new homes, especially at times of tension between the two countries.

It also aimed to explore the role of the BBC Persian Service within Iran's complex mediascape. Whether and how it functions as a site of home-diaspora interactions; whether it is a site for negotiation of identities and conflicts over politics, religion and rights; and what its potential contribution to the development of 'objective' reliable news reporting about that country might be.

The establishment of Persian Television during the framework of this project gave it heightened salience but also greater political sensitivity. BBCWS personnel found themselves caught up in a period of considerable political upheaval in Iran with consequences for their travel, security and professional lives.

A sub-theme was to explore the same set of questions as they pertain to the BBC Pashto Service.

The research was conducted through three main foci:

Why Iran Smiles on Jerusalem Clashes

BBC Persian Service and the Iranian Revolution of 1979

Thirty Years On: The Iranian summer of discontent

BBC World Service: Over to You