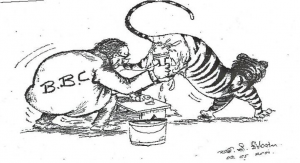 This project aimed to identify the variegated ways by which the BBC World Service has negotiated between impartial and equal news for all, and the necessary skills of translating ad sensum, thus adjusting to users’ contexts, most importantly with a view to diasporic audiences.

We aimed at the greatest possible contrasts by selecting three case studies in war zones that seem, at first sight, incomparable : Sri Lanka with two or three BBC services (Sinhala, Tamil and of course English); the Middle East with a single BBC service to all Arabs; and former Yugoslavia, much reduced by recent cuts in language variety. These case studies allowed us to compare the Politics of Translation across, what might seem to be at first sight, incomparable regions of civil war. The results interact closely with Cheesman and Nohl’s question: ‘The BBC World Service: One Voice or Many?’

Our case studies brought to the fore a number of dynamics shared across all three regions. We did so by agreeing, collectively, on a subdivision of the hold-all concept of ‘translation’. Each of us distinguished four processes involved: transporting [what reaches Bush House from which source]; translating [the seemingly merely linguistic activity]; transposing [by inflexions of tone or emphasis]; and transmitting [by decision-making on who gets what when from the World Service].

Each of these four sub-processes of translation in the wider sense worked differently for each region, as indeed did audience reactions to them. We shall specify some details below.

The aims of the project were developed through the following research questions:

By splitting up the blanket notion of translation into four dimensions, and then showing how they are not always interconnected, this theme was able to see subtle differences in transporting, translating, transposing, and transmitting. To evidence the dynamics in detail, was helped by six regular meetings in Amsterdam, as well as by three meetingswith other researchers on the Project at large in London.