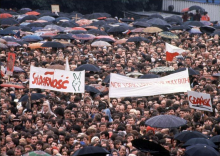 The BBC World Service, and those who work for it, is located within a number of cultures - political, institutional, diplomatic, technological, intellectual - with which it has had to find accomodation, and through which it attempts to navigate an editorial path. Accordingly, in the delivery of its broadcast output the BBC's overseas services simultaneously occupy a number of different worlds, being permanently engaged in a process of calibration between often competing and ever-changing pressures. This research topic explores the experience of diaspora communities, both within Bush House and as part of its listening audience, as a way of investigating these practices of enculturation and their consequence.

In the course of the research, attention has been paid to particular episodes in the history of the World Service alongside an analysis of current activities. For example, examining the role of international broadcasting during the Hungarian uprising of 1956 and the rise of Polish Solifarity in the early 1980s has delivered insight on its own terms, but also provided a vauable historical counter-point to an understanding of the contemporary machinery of public diplomacy, of which the BBC World Service is a part. This latter dimension can be seen in the Tuning In report for Wilton Park, an academically independent agency of the Foreign and Commonweath Office - Public Diplomacy: Meeting New Challenges.

In detailing the development of working practices at the BBC World Service, research  has revealed the evolutionary and generational power of diasporic sensibilities in shaping attitudes and life in Bush House. This finding has been reflected in the establishment of Generation 2012, an ongoing collaboration between Tuning In and diasporic identity through the prism of international broadcasting and media training in the run up to the 2010 Olympic Games which has been featured on the World Service daily magazine Outlook programme.

The BBC World Service and British Soft Power in Perspective