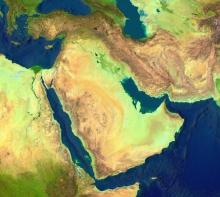 This theme attempts to describe and analyse, systematically and comparatively, the history and role of the BBCWS in the region. By taking a broad regional optic and considering the relationship of the BBC in and to the Greater Middle East through the lens of the diasporic broadcasters based at its centre in Bush House, London, it is intended to illuminate the inherently transnational nature of these relationships and the World Service. The BBCWS is a transcultural contact zone – a space of performance, representation and of unequal but reciprocal relations that demand our attention if we are to learn from the lessons of past conflicts. At a time where potential conflicts in the Greater Middle East are exacerbated by British and American foreign policy strategy we may do well to pause and take stock of the failures and the successes but most of all the complexities of diplomatic relations between the UK and the Greater Middle East.

Few international broadcasters have been more controversial, more central to historic political events and more responsive to changing international relations and the altered media landscape than the BBC World Service. The debate about the relationship between the BBC and the FCO will continue, not diminished by the historical evidence presented here, and the World Service looks set to play an ever more significant role in British public diplomacy into the 21st century.