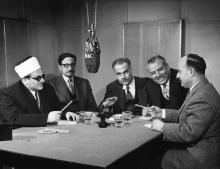 As the World Service’s first foray into foreign-language broadcasting (1938) and its first initiative to branch out into non-English-language television (1994-96; 2008-present), BBC-Arabic has played a central role for the Corporation. Distrust of its claims to impartiality, however, persists. To assess both claims and critiques, we examine its politics of translation under four headings: transporting data from the field to the broadcaster; translating from one language into another; transposing data and message by inflexions of tone; and transmitting the result to selected audiences at selected times. We do so from both an etic (‘outsiders’) analysis of BBC output and an emic (‘insiders’) analysis of what audiences perceive and react to by way of critical re-inputs. To understand the discrepancies, we consult political constellations, in-house editorial mechanisms, as well as public criteria of trustworthiness.