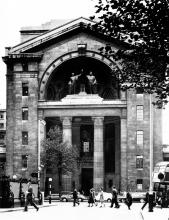 This research focuses on Bush House as a physical representation of the WS ethos and tradition, not only in the sense of how buildings are used to influence behaviour, but also just as importantly how social behaviour influences buildings (Hall & Hall, 1974; Baldry, 1999). Bush House is considered here as a centre for value production and organisational cohesion in an organisation with offices around the world. A specific focus is on the ways that the cultural and social organisation of the 32 language services is reflected in the physical layout of the building.

This research is based around interviews with several types of WS staff: (for the purposes of this research called) technical managers (TM), coordinating managers (CM) and editorial managers (EM) based on their job description and in order to preserve their anonymity. Those interviewed were based in different language services, as well as more centrally placed departments. Other materials include secondary sources, mainly from previous World Service staff about the organisation, but also architectural and sociological theories about space, place and office planning.

Architectural psychologist David Canter said that a 'sense of place' is gained from the interaction between the physical locale, the activities linked to this locale, and the way the subject constructs meaning about the place and its activities (Groat & Wang 2002: 77). Likewise this research attempts to uncover what kind of place Bush House is through the subjective experiences of the WS staff, how their activities influence and are influenced by the building, and what this says about the organisation as a whole.