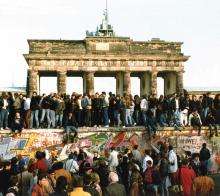 The Cultures of Diplomacy theme has paid particular attention to “critical events” in the history of the World Service alongside an analysis of current developments in international communication strategies. In this regard, the examination of Bush House’s reporting of the rise of Polish Solidarity in the early 1980s has been revealing not only in its own terms, but also as a historical counter-point to contemporary machinery of public diplomacy.

Coming to terms with Cold War broadcasting was a defining experience for the BBC World Service and its language services to Central and Eastern Europe. Staff working in these Section’s (and subsequent generations of dissident broadcasters) found themselves in a peculiarly instrumental position as they broadcast news of the outside world through the Iron Curtain to audiences with whom they shared a common heritage. For the Polish Section of the BBC, the path of Solidarity cemented the importance of this diasporic link with London at a moment of acute international tension.

a)         To reveal, on the basis of archival and interview research, the story of the BBC’s reporting of the rise of Polish Solidarity

1.      What was the impact of BBC reporting on the comprehension of events in Poland on both Polish audiences and wider international sentiment?

2.      To what extent did factors such as generational change within the BBC Polish Section and the personal attitudes of Polish staff affect working practices within Bush House and the reporting of Solidarity?

3.      How did the BBC Polish Section staff, as a distinct diasporic group, relate to the wider Polish community in Britain and the international diaspora?