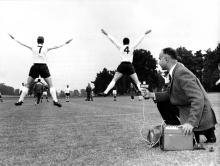 This project was the starting point for Sport Across Diasporas and involved extensive archive research at Caversham by James Wyllie aimed at exploring the origins of sport at the BBC World Service (BBCWS) and how and why it has changed over time, using notes of production schedules, minutes of meetings and data on audience research and finance as well as programme notes. This background research presents a story of responsiveness and change in a rapidly transforming world and provides insights into what is distinctive about sport on the BBCWS.

This research was framed by the need to contextualise sports broadcasting on the BBC World Service.

This project revealed the diversity of rich material at the BBC Archive at Caversham and the distinctive qualities of this as a site of research. Material was not organised and classified as we might have expected and the process of unravelling sources of material, including fading scribbled notes on envelopes as well as more formalised production schedules was a source of enormous interest and excitement in itself. Sport as a set of practices was neither as formally present nor as prominent in the schedules as we had expected, neither were all sports covered by the service. This stage in our work provided insights into the moments of change in the BBCWS from its instigation as the Empire Service through times of social change and upheaval, including World War two and technological innovations and eruptions. The BBC itself moved from pole position, for example in coverage of the Olympics, having been overtaken by political power changes and new technologies.