Employment and the Experience of Diasporic Nationalism 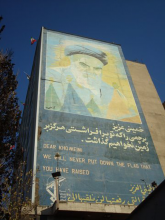 This project aimed to understand better the experience of being employed by the BBCWS, being trained into its values and into Britishness.

We found that long-standing employees often saw the successive waves of new arrivals as less sophisticated and ‘cosmopolitan’ than themselves and there were certain tensions about some inappropriate behaviours enacted in Bush House. Latterly, the PTV staff have had to rethink their own relationship with Iran as BBCPTV has come under such rhetorical attach by the Islamic Republic.