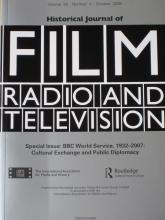 For an institution whose credibility rests on the maintenance of a reputation established over eighty years, an understanding of its past would seem an essential adjunct to contemporary practice. Yet there exists surprisingly little historical cartography of the BBC World Service in scholarly output and limited appreciation of the strategically significant role it has played in world affairs by the BBC’s domestic audiences. Forged by the geopolitical and cultural imperatives of empire, world war, cold war and post-colonial realities, overseas broadcasting from Britain has had to endlessly re-calibrate itself for an evolving world while maintaining recognisable institutional values that have stood the test of time. Once again on the cusp of a major reorganisation – large cuts in revenue and the anticipated move from grant-in-aid to Licence Fee funding – this special edition of the Historical Journal of Film, Radio and Television explores the past lives of the BBC World Service as a way of contextualising our present understanding of the work it does.