The BBC Empire Service: the voice, the discourse of the master and ventriloquism 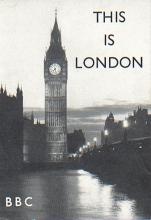 This research examines the light cast by psychoanalytically derived perspectives on the voice - in particular Lacan’s work - on the political functions of the BBC’s Empire Service and the foreign language services that developed out of it. Focusing upon the formal qualities of the voice, it analyses how the voice as broadcast on the Empire Service was deployed as a means of seeking to link up the British Empire, and above all the British diaspora. It moves on to examine how - with the emergence of the BBC’s first foreign language services directed at indigenous, colonial populations - the voice came to play a rather different role, as an instrument of imperial administration. This research applies the model of ventriloquism to illuminate how these services allowed the imperial centre to speak in the voice of its peoples.