On the benefits of uneasiness…

Dr Michael Rodgers is Honorary Associate and Associate Lecturer in English Literature at The Open University.

His research interests include twentieth-century literature, theory, and film; the intersection between literature and philosophy; and humour.

Referring to himself using a nom de plume in his autobiographical memoir Speak, Memory, Russian writer Vladimir Nabokov writes that ‘across the dark sky of exile, Sirin passed like a meteor, and disappeared, leaving nothing much else behind him than a vague sense of uneasiness’.

My new book, Nabokov and Nietzsche: Problems and Perspectives, addresses fundamental problems in Nabokov’s writing which make his work perplexing, mysterious and frequently uneasy. It demonstrates some of the ways Nabokov makes readers uneasy through both his literary and philosophical associations with Nietzsche’s often uncomfortable thought.

Think, for example, of the contradictions at play in our assessment of the paedophilic, yet incredibly charming, Humbert Humbert in Lolita. The novel’s questionable combination of aesthetic and ethical values makes it difficult to map onto a comparable set of morals that any reader is likely to share.

Yet understanding such contradiction as an example of how the German philosopher Friedrich Nietzsche encourages moral confusion by questioning conventional Christian morality not only allows us to work through problems of interpretation, but also recognise that such uneasiness can reward the reader.

In facilitating debate on challenging issues and inviting readers to consider different viewpoints, the ‘positive discomfort’ in Lolita, for example, means that readers enact the Nietzschean experience of thinking and living the world afresh. As such, Nabokov offers us unique opportunities to experience the unsettling but exhilarating visions of Nietzschean philosophy.

The recognition of such discomfort aims to wrestle power from Nabokov’s hands into the reader’s, allowing us to ‘argue back’ rather than simply being patted on the head for puzzle–solving. Adopting a Nietzschean position not only encourages more imaginative readings of Nabokov's work, but also more astute readers who, made to feel uneasy through questioning where, why, and how we derive value, are continuously rewarded by the experience.

Just as I champion the idea of ‘positive discomfort’ in Nabokov’s writing (whether challenging existing assumptions or opening up new lines of thinking), the benefits of uneasiness obviously extend to everyday life. And I can think of no facet of life more akin to entertaining other perspectives and interpretative possibilities than the student experience.

Whether the initial decision to embark on studying (‘will it be too hard/expensive?’), juggling the work/life balance (‘how do people find the time?’), or grappling with specific problems (‘do I really understand this theory?’), willingly engaging with ‘uneasiness’ is perhaps what students do most.

Deciding to entertain another approach, and potentially recognise this as more sensible or effective than the one they currently adopt, is a peculiarly provocative task.

Not only does it take maturity (for example, changing one’s mind on a given issue may mean having to swallow pride or accept that you may not have been entirely right), but also resilience in terms of submitting your thoughts for (constructive) critique time and time again.

Experiencing the reddening of cheeks when confronted with a question in an exam is experiencing such uneasiness first-hand. It’s the experience of challenging, problematising, and critiquing the ‘schema’ by which we have previously known the world. 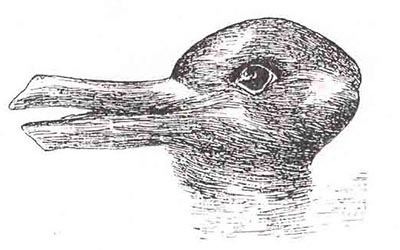 Deliberately putting yourself outside of your comfort zone is an especially positive thing to do because it means we’re striving for better understanding.

Effectively, the benefits of uneasiness can be related to what Thomas Kuhn refers to as the ‘paradigm shift’ - the idea of causing fundamental changes in how we process the world.

The Copernican Revolution or Ludwig Wittgenstein’s ‘duck-rabbit’ paradigm (illustrated, right) are famous examples where we are made to feel initially ‘uneasy’ due to a shift occurring in how we deal with existing information – a cognitive ‘changing of the guard’, so to speak.

For those who have ever wondered about why they decided to embark on studying, and how difficult they might sometimes find it, keep this idea about the benefits of uneasiness in mind. Nothing worth doing is ever easy.

Dr Michael Rodgers is the author of Nabokov and Nietzsche: Problems and Perspectives (Bloomsbury, 2018) and co-editor of Nabokov and the Question of Morality: Aesthetics, Metaphysics, and the Ethics of Fiction (Palgrave, 2016).

Learn more about literature and philosophy with our free resources on OpenLearn.