"The first and most urgent task before us is to cater for the many thousands of people fully capable of a higher education, who for one reason or another do not get it, or do not get enough of it as they can turn to advantage.

"Or, as they discover sometimes too late, that they need. Only in recent years have we come to realise how many such people there are.”

These were the words of Lord Geoffrey Crowther, the first Chancellor of The Open University, on receipt of the brand-new institution’s Royal Charter at a ceremony fifty years ago today [23 April].

He spoke to the need for a different approach to higher education [pictured below right], and a sense that higher education was too narrowly spread, hoarded by the privileged and denied to a broader public that could, if given the chance, succeed. 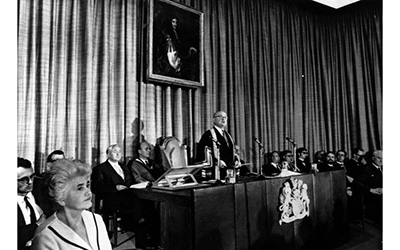 The Open University would be a university for all, all of the time – not some, some of the time. Its mission would be to be open to people, places, methods and ideas. It would require no entrance qualifications to join.

Students could study anywhere – it would be the UK’s first distance learning university. It would teach in exciting new ways, first using television, radio and correspondence and then becoming an early adopter of online learning.

And it would change the way we learn, including introducing the build-your-own Open degree and, later, informal learning such as Massive Open Online Courses (MOOCs).

In this way, the OU would widen access to higher education, helping people to benefit from university on a scale previously unimaginable. Since then, more than two million people have studied with the OU, 200,000 of those here in Scotland.

What is remarkable to me is how our students do it. There has never been such a thing as a typical OU student, but what they’ve tended to have in common, now as then, are hugely busy lives.

Three-quarters of our students are studying while working, and many are also looking after children and other relatives. 22% of OU students in Scotland have a disability.

Across the UK, the OU teaches 24,000 students with disabilities – more than the entire student population of many universities.

OU students are everywhere. From Shetland to Selkirk, Portree to Peterhead, there’s an OU student in just about every community in Scotland. Almost a quarter live somewhere that’s officially considered ‘remote’ or ‘rural’.

We have students studying on the front line in Afghanistan, in hospitals, and in prisons.

Our students are just as at home in the dressing room as they are in the board room, with professional athletes and business leaders alike among those learning with us.

And our partnerships with trade unions and charities make sure that everyone who needs to be able to learn, can do so.

But reflecting on Lord Crowther’s words 50 years and 200,000 Scottish students later, our mission stays – has to stay – the same.

There are still thousands of people who could succeed at, and benefit from, higher education, but who aren’t (yet) getting it. Scottish higher education is undoubtedly more accessible than it’s ever been, but all of us have more to do.

Recently I’ve been asked many times how I expect the OU to change in the next 50 years. And we talk about technology and automation and new ways of teaching and learning, and I don’t doubt things will be hugely different in the future.

But what’s most important to me is that the fundamentals of the OU stay the same. That those don’t change. Because The Open University is about people, about a belief in the ability of people, to learn and succeed, regardless of their background or where they’ve come from.

It’s about an unshakeable conviction that central to any meaningful conception of social justice is giving everyone an equal chance to become a better version of themselves, to achieve their potential, through education.

That’s what The Open University was founded on. It’s why we’ve done the work we do for the last fifty years. And I think it will sustain us – and our students – well into the future.

Find out more about The Open University’s 50th anniversary at 50.open.ac.uk