Scotswoman Jennie Lee has buildings named after her across the UK and her life is the subject of a touring exhibition that starts in Glasgow today (30 October 2019). But who was she and what did she do to deserve such tributes?

Here are ten things you might not know about Jennie Lee:

1. She was a miner’s daughter who gained a law degree when few women went to university. Jennie Lee (1904-1988) was born in Lochgelly in Fife. Her father and grandfather were miners. She was expected to leave school to start working at 14 years of age but convinced her parents to let her stay on by taking extra classes and she became the dux of her school.

Jennie was able to start studying at the University of Edinburgh in 1922 through financial assistance from Fife Council and Carnegie Trust. Her father would regularly cycle from Fife to Edinburgh to bring her food hampers donated by the local community and to bring back her laundry. She gained a law degree, a Master of Arts and a teaching diploma.

2. She became an MP when she was too young to vote. 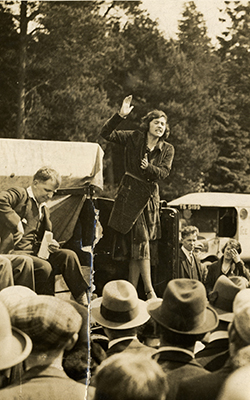 Jennie was 23 years old when she was voted into Westminster at the North Lanarkshire by-election in 1929. At that time the legal voting age was 30 for women and 21 for men. She was then the youngest Member of Parliament and one of the earliest women MPs.

Jennie’s first speech in Parliament caused uproar as she attacked Winston Churchill’s budget proposals, accusing him of “corruption and incompetence”, but he praised her afterwards for being brave enough to criticise him publicly.

3. She was one half of a ‘power couple’. When Jennie married fellow Labour MP Aneurin Bevan - known as Nye - she was the better-known of the pair. She proved to be a powerful political support to him in his role as Minister for Health while he was setting up the National Health Service (NHS) in 1948.

4. She was a rebel. Jennie and Bevan opposed the Labour Party’s support of the introduction of charges for prescriptions, dental care and spectacles in the 1950s. They formed a rebel left-wing group within the Labour party, nicknamed ‘The Bevanites’.

5. She was the first ever, and arguably most influential, UK Minister for the Arts. Jennie trebled the Arts Council grant in six years and widened the focus of arts investment from the elite of London to Scotland, Wales and the regions of England.

6. She gave The Open University its name. Jennie was the Minister for Arts when Prime Minister Harold Wilson asked her to turn his idea for a “university of the air” - providing higher education at a distance - into reality. She called it The Open University due to its unique open access policy, with no qualifications needed for most undergraduate courses.

7. She fought fellow MPs who said the Open University idea was “blithering nonsense”. Jennie faced opposition to the Open University concept from all angles, including from within her own party, the Treasury, and the Department of Education and Science. She chose to ignore it and went straight to the Prime Minister for funding. She said: “There would have never been an Open University if we had gone along conventional channels.”

8. She chose to “out-snob the snobs”. Jennie recognised the importance of gaining a Royal Charter for The Open University (OU) - awarded 50 years ago this year - for legal and royal approval to grant higher education qualifications. She said: “I was quite certain that if we were going to have a university that didn’t insult people, that made no compromise on standards, I would have to out-snob the snobs.”

9. She became a Baroness and a close friend of the only female President of India. In the 1970s Jennie joined the House of Lords, becoming ‘Baroness of Asheridge’. She visited India several times and became close friends with the Prime Minister, Indira Gandhi, before her assassination in 1984.

10. She left personal and political papers and books to the OU. Jennie died of natural causes in 1988. An exhibition of materials from the OU Jennie Lee Archive Collection, Glasgow City Archives and ONFife (Fife Cultural Trust) have been brought together for the first time, to tell the fascinating story of Jennie Lee’s life.

The ‘Jennie Lee: From Lochgelly to the Lords’ Exhibition is at The Mitchell Library in Glasgow until 30 November 2019 and at the Lochgelly Centre in Fife, from 6 December 2019 to 6 March 2020. More information.

You can also view items from the OU Jennie Lee Archive Collection by visiting the online exhibition which launched today on the OU Digital Archive.