#IWD2018: Maria Macnamara, OU Honorary Graduate and founder of Smalls for All

Maria Macnamara is the founder of Scottish charity Smalls for All.

In 2015 Maria was recognised as an inspirational volunteer and awarded a Point of Light Award by the Prime Minister, who said: “Maria’s work will have had an immediate impact on the daily lives of thousands of women and I am delighted to recognise her service with this Point of Light Award”.

In 2016 Maria was honoured with an MBE, and in 2017 she was awarded an OU Honorary Degree.

Smalls for All is a Scottish charity which collects and distributes underwear to help women and children in Africa.
We help those living in orphanages, slums, camps for people who have been displaced and schools, as well as providing underwear to hospitals to help those suffering from medical conditions like obstetric fistula.

1) What motivated you to start Smalls for All?

Following a series of trips to orphanages in Brazil, Thailand and Ethiopia where I worked as a volunteer, I knew I wanted to do more.
Each volunteer trip was a huge learning experience for me and after my visit to Ethiopia in 2009 I wanted to do something sustainable that would have longer-term benefits for the women and children I had met.
I remember learning from a priest in Zimbabwe about the lack of underwear and the problems this can cause.
Not only is it a health and hygiene problem for many poor African communities, as women often only own one pair of tattered pants or have none at all, but underwear can often be seen as a bit of a status symbol.
Women who can afford underwear tend to be seen as having someone who cares for them – a husband, brother or father – or having an independent income.
They are not on their own, or are not in need, so they are not seen as vulnerable. And that’s how Smalls for All came to life as a registered charity in 2010, to help vulnerable women and children by providing them with ‘Smalls’. 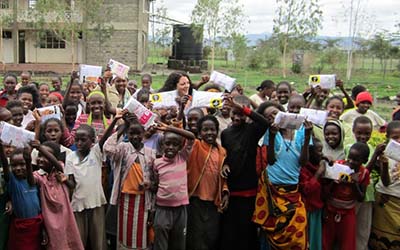 2) What inspires you about the women that you work with and support?

When I look at my life here compared to that of the women supported by Smalls, I feel so incredibly lucky and driven to try and help every one of them who is fighting for a better future.
Despite often having nothing, I’ve met amazing women who strive to work and bring up families in the most impoverished conditions and show tremendous resilience – that’s inspirational. 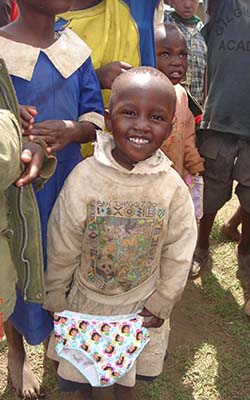 3) What will Smalls for All be working on this year?

Smalls and our PANTASTIC supporters will continue to collect and distribute thousands of items of underwear, both new pants and new or gently worn bras throughout 2018.
We will continue to work with our partners and distributors including National Police Aid Convoy (NPAC), Freedom from Fistula and Kenya Children’s Homes, who distribute the underwear to the women and children in Africa who need it most.
Alongside our work to supply underwear, we also support a small number of children at the schools and orphanages we have links with, to help them access education.
We’re currently supporting girls from St Monica’s children’s home in Kenya, Mashimoni Primary School in the Kibera slum of Nairobi, as well as girls from Soila Maasai Girls Rescue Centre.
In Malawi we’re providing support to preschool children living in 3 villages - Malili, Kuthanga and Makanga near Lilongwe, Malawi.

4) Why did you decide to accept an honorary degree from The Open University and do you think the OU and Smalls for All have anything in common? 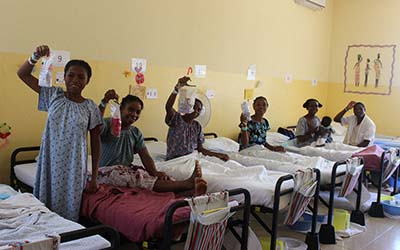 I have been very lucky to be the recipient of several awards recognising the work of Smalls for All.

My reason for accepting any award is to ensure that the work carried out by Smalls for All can be highlighted and understood, helping us to raise awareness and to develop our work.

Every trip to Africa is a learning process, as we look to understand the challenges people continue to face and consider the best way to help and the partnerships we should forge.

Like the Open University, we seek to be inclusive and to continue to learn in order to transform lives and help to build a better future.

5) How are you celebrating International Women’s Day?

As well as thinking about those women and children who need our help, I will be spending the day with an amazing group of women who volunteer to help Smalls.
We will be at our warehouse opening hundreds of parcels of donated underwear, sorting the thousands of garments into their various categories/sizes and parcelling them up ready for the next collection.
So basically this International Women’s Day I will be counting knickers and bras. A basic need and a simple celebration.

Find out more about the work of Smalls for All and getting involved
Information about The Open University's International Development Office
OU module 'International development: making sense of a changing world'
International Women's Day on Twitter - #IWD2018