Using the power of writing to deal with grief

‘When I Had a Little Sister’ is her second published novel.

Five years ago, my little sister, Tricia, died by suicide. She was 46 and had been treated for depression for most of her life. Two years before she died, she was diagnosed with bipolar with psychotic episodes.

We didn’t talk about the diagnosis; we never had the right words to talk about difficult subjects, including mental ill-health. I remember nodding but not asking questions.

Tricia took her own life in the farmhouse in Lancashire where my family have farmed for three generations.

As she had no partner or children the house was left uninhabited after she died and it took my father, my big sister, Elizabeth, and me weeks to clear three generations worth of stuff.

Scattered around the house we found diaries she had written dating back to when she was 14 until the day she died.

I was frightened of the diaries; I was frightened they would contain descriptions of black despair, and possibly blame for us, her family, for not doing enough to help her.

I asked Elizabeth to store the diaries and I never expected to open them.

Two years later I was invited on a writing retreat to Hawthornden Castle, in Midlothian, but just before I left, the writing project I planned to work on stalled. I remembered the diaries.

I went to the castle in February, it was bitterly cold, and through the attic bedroom window on my first day I could see it gently snowing.

I had a supermarket ‘bag for life’ on the bed full of Tricia’s diaries, but I was still frightened. I walked round the grounds to build up the courage to begin.

It took me a week to read them all. I was relieved to discover they contained happy memories as well as accounts of illness, and not only was there no blame for the family but I found many kind comments about me. I read them over and over.

It was as though Tricia was there with me; the diaries smelled of her – she was a heavy smoker and the scent of tobacco lingered.

She loved music and every time she mentioned a song, or wrote out some lyrics, I found the song on my iPod and listened to it. It was like we were having a conversation.

After reading all the diaries I started work on what became When I Had a Little Sister and over the remaining three weeks of the retreat, I produced 30,000 words. It turned out the book was waiting to be written.

It became not only about Tricia but about three generations of my family and about growing up on a Lancashire dairy farm in the 1970s. There is sadness in the book, of course, but humour too.

I completed a draft over the following year and the last words I wrote were the subtitle: ‘The Story of a Farming Family that Never Spoke.’

When the time came to send the book to my agent, I found it difficult because it felt like a joint project with Tricia was coming to an end. 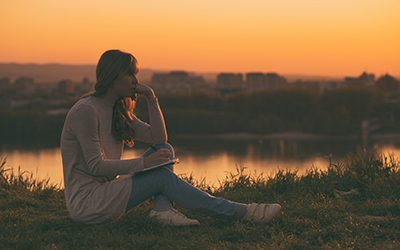 Writing the memoir had meant not only going through Tricia’s diaries but my own diaries, family photo albums, scrap books and all sorts of memorabilia.

It also involved going back over the notes taken at her inquest and studying the NHS investigation report. It was hard, but it felt necessary.

Putting all this information – some of which I was learning for the first time – into words helped me to sort out my own thoughts and feelings about Tricia and allowed me to calm the panic and despair left by her loss.

I wrote the book for myself, but after it was finished, I realised it may help other people too.

There is a stigma surrounding mental ill-health and suicide and I hoped that my memoir would help to remove some of the loneliness, shame and fear and to create understanding.

Tricia was very creative and she wrote in her diaries about her hopes of becoming a writer, so I included some of her actual words in the book, in quotes, I also included a copy of a self-portrait she had painted - so now she is a published writer and artist. I think she would approve.

This article was originally published by The Scotsman.

Catherine is appearing at the Edinburgh International Book Festival on 23 August 2019 with ‘Family Grief Examined’, which is part of The OU 50th Anniversary Series of events at the Book Festival. More information