These new US missions, together with others involving the OU, could ultimately pave the way for the next human visitors to the Moon.

It’s a prime example of the world-leading lunar research carried out by OU academics, which includes researching methods that may help build future habitats.

The OU has teamed with NASA Goddard Spaceflight Centre (in cooperation with the European Space Agency) to develop an instrument called PITMS to monitor the very thin atmosphere near the surface of the Moon.

The instrument will be carried to the Moon in 2021 by a commercially-provided lander, under NASA’s Artemis program.

Finding out about the natural "water cycle" 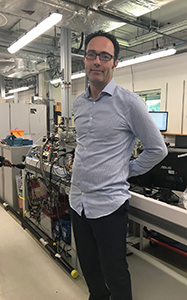 The OU’s Dr Simeon Barber (pictured, right), who is leading the OU’s contribution to PITMS, explained that the instrument will help investigate the emerging concept of a natural "water cycle" on the Moon.

“There is increasing evidence from orbiting probes that water may migrate away from equatorial regions, as visited during the Apollo era, driven by extreme day to night temperature cycles, until it becomes tightly trapped at permanent cold polar locations” said Dr Barber.

The PITMS instrument will provide an early opportunity to study the dynamic behaviour of water on the Moon today, as well as proving some of the detection technology that will be used by the OU on subsequent missions.

Understanding the sources and movement of water on the Moon are key open questions in lunar science.

Finding answers would lead to developing plans to harvest lunar water as a resource to support future human exploration mission and the establishment of lunar bases.

The instrument selected by NASA is a variant of OU’s ProSPA mobile laboratory already in development for the European Space Agency and scheduled to land near to the Moon’s south pole on a Russian spacecraft in 2025.

In this cold region of the Moon, the scientists expect to find elevated levels of water ice on or below the surface which would be collected by a drill for analysis.

ProSPA is being designed to enable scouting of the Moon’s surface to establish if it is possible to extract oxygen from Moon rocks or dust, to reveal if this important gas can be produced on the lunar surface.

The OU is also a collaborator on another upcoming lunar project, the LUVMI-X: developing mobile instruments for lunar exploration, led by the OU’s Dr Simon Sheridan, Research Fellow in the STEM faculty.

While Dr Sungwoo Lim, OU Research Fellow in Space Sciences has created a bespoke industrial microwave to melt simulants of soil from the Moon to see if the microwave heating method is possible to fabricate building components on the Moon.

These projects, concerned with scientific exploration of the Moon, are closely linked to the institution’s legacy of lunar and space research.

An OU research team led by Dr Mahesh Anand has pioneered the search for water on the Moon over the last 10 years by analysing the Moon rocks returned to Earth by Apollo (NASA) missions in the 1960s and 1970s.

The new techniques developed in the laboratories at the OU have found much higher concentrations of water in some rocks than were evident in the original investigations.

The OU, thanks to its expertise and instrumentation, is at the forefront of the search for water on the Moon as well as playing a lead role in steering the strategic way forward for its exploration both now and in the future.

The OU collaborates with UK, European, US, and Russian lunar projects and there are ongoing discussions with Chinese space players, regarding missions and projects.

For Dr Barber, that collaboration is key. He said:

“To properly understand the Moon, we need to visit new places, with new scientific tools. We need to collaborate with partners to obtain the best coverage of the surface, and compare what we find in order to build up a global picture.

“The science we achieve, in particular on the availability of accessible water and oxygen, could help the international community to formulate new ways to explore the Moon and space in a more sustainable manner by using these off-planet resources.”

The OU’s Dr Mahesh Anand (pictured below, left), a renowned lunar scientist and Reader in Planetary Science and Exploration, pioneered the discovery of water in Moon rocks. 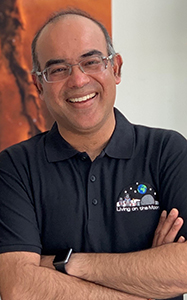 This discovery, combined with the data that has revealed water ice in craters on the Moon, has been a game-changer in Moon exploration and the race to consider building habitats and creating a base on the Moon.

Dr Anand, who has published more than 30 scientific papers on Moon rocks and water, said:

"I think discoveries made in the last five years have made it much more likely that we will see humans going to the Moon for extended periods of time in the not too distant future.

"There is definitely a global demand for this as many more powers enter the space race."

The continued study of Moon rocks and ways to extract water from lunar soil, coupled with missions to search for water on its surface - all involving OU scientists - combine to make the possibility of a return to create a permanent base on the Moon a real possibility. Find out more about the latest news and events from The Open University in Scotland with the August 2020 issue of Open Outlook.