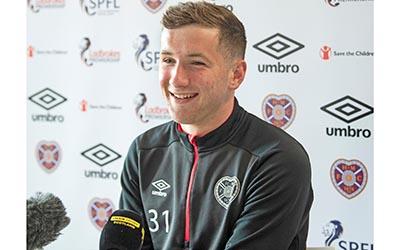 Former Hearts player Bobby Burns may only be 21 but he has his mind firmly set on the future. Currently on downtime with a double leg break sustained back in October, the professional footballer is planning for his future. Now halfway through an Open University degree, he flexibly balances his studies and his football career, now currently on loan to Glentoran from Barrow AFC.

Speaking on the second episode of the new Open University podcast ‘Life…On Our Terms’ about how he manages football and study, Bobby said, “It’s interesting to just sort of challenge yourself in a different way, you know, sort of intellectually rather than physically and it is just something that I’ve always really wanted to do because I think it gives you a great backup plan for after football but it takes real self-discipline to tell the rest of the lads in the team that you don’t want to go for that golf round or go and play Xbox with them and want to sit down and do a maths exam, but it will be worth it in the end.”

Bobby was first introduced to The Open University whilst playing for Hearts in the Scottish Premiership. He realised he could not attend a conventional university due to his football commitments and one of the other players on the team suggested The Open University.

He is studying an Open Degree in Science, Technology, Engineering and Maths, a unique degree to The Open University which allows you to flexibly pick and choose your modules from a range of disciplines.

“I’m really enjoying it. There’s so much within that, even marketing and business is all part of it too. The Open Degree gives you a lot more flexibility, you can go down lots of different routes and really experience what suits you best.”

Bobby normally trains from 9:00am – 1:00pm each day and then has the rest of the day free to complete his studies.

“I try to make sure I do most of the work at the start of the week and get it done before the busy weekends.”

Bobby’s commitment to study comes from a place of making sure he has security for the future and life beyond playing on the pitch. “The football career can be brutal like the best case scenario is your career finishes at 35 but it could finish earlier and then a lot of people want to try and get into coaching but if in your first job you lose your first three or four matches you could get sacked and you're not getting another one soon.”

“You want to have that security that if the football started to go or whatever, and your career is over, you have something else that you can get involved in and sort of provide for your family and earn money.”

When discussing his plans for where his degree will take him, Bobby has this to say, “I think getting an undergraduate degree will be great for me and then I will be looking at a more specific master’s degree. Also, maybe work with sport and help the balance because sport is becoming such a business. Maybe look at director of football jobs or more football administration, I’m not really sure yet but I just know I’m probably on the right path but don’t know exactly where that is taking me yet.”

“Bobby’s story is a brilliant example of how you can combine Open University study with work and family life. More than three quarters of our students in Scotland work full-time or part-time while studying with us, continuing to earn while they learn. It is very flexible, you don’t need previous qualifications, and you can enrol for one module at a time, choosing whether or not to build up a certificate, diploma, or degree.

“The same focus and determination that Bobby shows on the pitch shines through in his commitment to his degree. We’re delighted that he has taken part in this podcast inspiring other young people and those involved in sport to study with us.”

You can listen to Bobby’s story in episode two of “Life… On Our Terms” here: https://pod.fo/e/b09b1