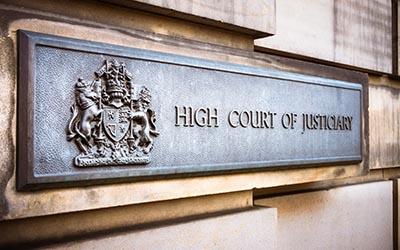 New research published this week shows support from the legal profession in Scotland to reforming elements of the Scottish jury system.

The research, from The Open University (OU) and published in the Journal of Medicine, Science and Law brings fresh input into the ongoing debate over reforms to the historic jury system in Scotland.

It reveals that the majority of legal professionals in Scotland would consider getting rid of the current three-verdict system in criminal trials, guilty, not guilty and not proven, and moving to a new binary verdict system, proven and not proven.

The new research is the first published study focused exclusively on the opinions of the legal practitioners in Scotland on whether to overhaul the current jury system.

An OU team consisting of researchers in Psychology: Lee Curley, James Munro, Lara Frumkin and Jim Turner, surveyed 78 legal professionals across Scotland. They considered options across the board, including whether to get rid of the current three-verdict system, the existing 15-person juries which currently operate, and the current size of the required majority for the jury to return a verdict.

Commenting on the findings Dr Lee Curley highlighted that there are questions to consider over the use of terms such as guilty or not guilty, both in court and in the media, and whether these can potentially mislead a novice juror towards trying to deal with “absolute truths”.

“When asked what they would do if they could re-design the Scottish legal system from scratch, most legal professionals indicated that they would use a binary verdict system of proven and not proven. This suggestion may link to ideas surrounding proof and truth and may direct jurors to their true role in a more nuanced way.

“The role of a jury is not to decide on whether an accused did factually commit the crime or not, rather their job is to use the evidence to establish whether the prosecution has proved their case beyond reasonable doubt.

“Although the proven verdict does not currently exist in Scotland the vast majority of our participants would define this verdict to mean that a crime had been proven beyond reasonable doubt. This definition had greater consensus than any of the existing verdicts in the Scottish legal system.”

The Scottish Government has taken steps in recent years to consider reforms to the system and has commissioned jury research to consult on views as to whether the differences should prevail. The OU study was conducted to involve legal stakeholders in policy changes and decision making, to compare legal professionals’ views with findings from previously conducted juror studies and to inform wider public and political debate.

Dr Curley said: “We wanted to gain attitudes relating to the fairness of the current and potential systems from those working in legal practice in Scotland as we felt these have been largely missing."

“Insight from legal professionals, who are well informed about elements of the system that may support the prosecution or the defence, is vital when evaluating the legal value of changes in verdict frequencies.”

On the question of juries, the main finding in relation to jury size was that participants were satisfied with the current 15-person jury system. The majority preferred a qualified majority verdict size (e.g. 12 out of 15) rather than either a simple majority or a unanimous majority.

When asked what combination of the three elements of the Scottish jury system they would choose if they could redesign the system from scratch, none of the participants suggested the current English system. A small minority of participants in the current study suggested that juries be abolished and replaced by a panel of judges.

Commenting on the team’s research, Dr Curley added: “Some of the novel factors of the Scottish jury system – such as the not proven verdict and its legitimacy - have been rightfully critiqued as it is disproportionately used in sexual assault cases. This injustice has been an inspiration in our programme of research. The current research may suggest that the three-verdict system itself and the lack of legal definition of the not proven verdict may be at the heart of the problem.”

Dr Curley and his team aim to advance on the current study and use the recommendations given by legal professionals to inform future research on the impact that a proven and not proven system may have on juror decision making.

Further, the team would like to involve other stakeholders, such as complainers of sexual assault, to investigate their attitudes towards a proven and not proven system.

Dr Curley added “We believe that all stakeholders, such as jurors, legal professionals, complainers and accused individuals who have been acquitted by the not proven verdict, should be included in discussions surrounding jury policy reform in Scotland.”