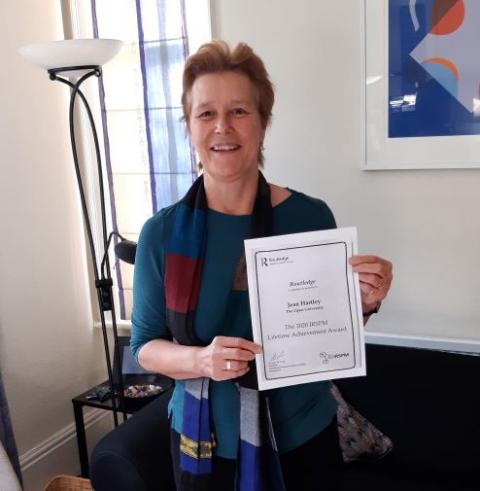 Professor Jean Hartley has been recognised today (Thursday 23 April) with an international lifetime achievement award for her outstanding record of teaching, research and publication on public leadership and management, over more than two decades.

Jean has received this year’s Routledge Prize for Outstanding Contribution to Public Management Research, awarded by the International Research Society for Public Management (IRSPM). A regular contributor to the Society, she was due to receive her award at the Society’s Annual Conference in Tampere, Finland, today but this was cancelled due to the coronavirus pandemic. Instead the award citation and ceremony are being conducted virtually.

She is internationally known for her research and teaching on the interplay between political and managerial leaderships, political astuteness capabilities, and the leadership of innovation in public services; and has written many field-defining articles which have been widely cited. In all her work she combines rigorous quantitative and qualitative research with close, interactive engagement with policy-makers and practitioners.

Jean is Professor of Public Leadership, based in the OU Business School, and is also Academic Director of The Open University’s Centre for Policing Research and Learning, an innovative interdisciplinary working partnership between more than 50 OU academics and 20 of the UK’s 45 police forces, creating research, education and knowledge into practice, and contributing both to theory development, learning and improvements in practice.

She is the author of seven books and numerous articles on leadership, innovation, improvement and organisational change, and public value, both in top journals and in practitioner outlets. She has won large research grants from a range of sources including the Economic and Social Research Council (ESRC), charities and foundations and government departments.

A Fellow of the British Academy of Management, as well as a Fellow of the British Psychological Society, other notable achievements include being a member of the Berwick Advisory Group which advised the Secretary of State for Health in July 2013 on improving patient safety in healthcare, including leadership, following the Francis Report.

As honorary trustee of the Friends of Ibba Girls’ School (FIGS) in South Sudan, she visits South Sudan regularly, and is particularly responsible for the monitoring and evaluation of progress and impacts of the pioneering girls’ school in Ibba since its inception in 2014.

“I am greatly honoured to receive this prestigious international award from my IRSPM academic colleagues, and proud to stand in a distinguished line of previous Routledge lifetime achievement prize winners. I am pleased to receive this recognition not only for my own work but also on behalf of the interdisciplinary team of over 50 academics which I lead across The Open University.

I also pay tribute to the teams of colleagues with whom I have worked not only at The Open University but also in previous posts at the universities of Manchester, Sheffield, London, and Warwick, and with colleagues at Harvard, Melbourne, Roskilde, and many other universities. With colleagues at Warwick in particular, I pioneered long-term partnership working with research consortia, and inter-organisational networks for knowledge exchange and learning and have taken this expertise into my work at The Open University.”

“I am delighted to be awarding this prize to Jean Hartley on behalf of the Society, and that Jean was nominated for her outstanding work on public leadership and management over two decades. Formed in the mid 1990s, the Society’s mission is to develop and support research on public management and public policy implementation among the international research community, and to facilitate the creation and dissemination of new knowledge and understanding across this community.”

This lifetime achievement award was presented for the first time in 2007. The Society’s Executive Board calls for nominations on an annual basis and then votes on the winner who has made a significant contribution to public management research over a sustained period of time. The chair of the nominations committee this year was Professor György Hajnal, VP Eastern Europe for IRSPM.