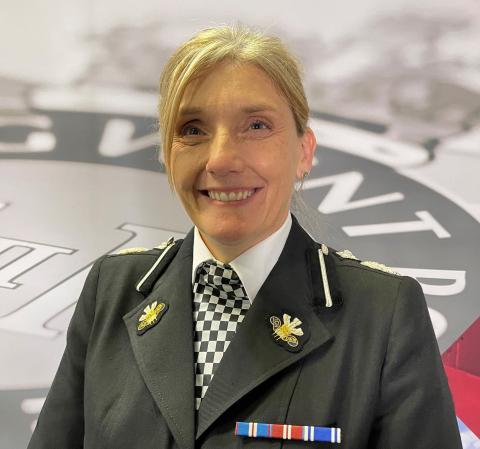 We are pleased to announce that Deputy Chief Constable Amanda Blakeman from Gwent Police has been elected as Vice Chair for the Centre for Policing Research and Learning.

DCC Amanda Blakeman has nearly 30 years in policing where she has held multiple roles. In 2008 she led the development of the critical processes around identifying and disrupting Organised Crime Groups. She has led the delivery of policing operations on a local level and as a specialist as Head of Public Protection and Head of Operational Support across a strategic alliance, as well as being a Specialist Strategic Firearms Commander.

Amanda was appointed as Deputy Chief Constable for West Mercia Police in February 2017 before moving to Gwent as a Deputy in 2019. Since then, she has had experience as a Senior Responsible Officer, the lead for Performance, Strategy and Continuous Improvement, SIRO, Professional Standards, firearms policy with overarching responsibility for People Services, Corporate Communications and Legal Services.  DCC Blakeman leads the NPCC portfolios for Serious Organised Acquisitive Crime, Police National Database and Disability and is also the all-Wales lead for Violence Against Women and Girls and Child Centred Policing.

On her appointment to the role Amanda states...

I believe the experience and the passion that I have for policing, as well as the experience I have in Wales, as non-devolved service working in a devolved environment, will bring a different dimension to the Vice Chair role and hopefully will add further depth to the discussion. I have invested over time in my own CPD and now see this as an opportunity to give something back to the development of policing for the future.