Dr Nick Caveney is appointed as Chair of the Centre 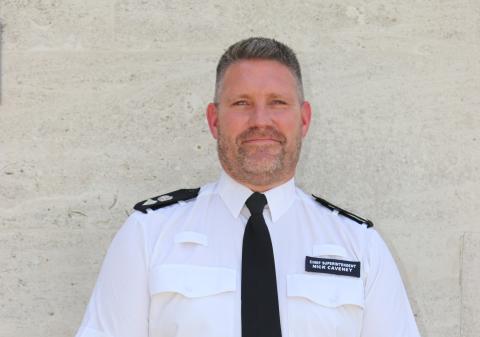 It is with great delight that we announce the appointment of Dr Nick Caveney, Chief Superintendent Hertfordshire Constabulary, to the Chair of the Centre for Policing Research and Learning.

In 1998 Nick graduated from the University of Reading with a degree in Philosophy, before moving into the city as a management consultant graduate trainee. Nick’s consultancy work focused upon business transformation in the insurance and investment industries.

In late 2000 Nick joined Lincolnshire Police, working in uniformed and crime roles before, in 2005 transferring to Hertfordshire Constabulary as a sergeant. Nick worked his way through the ranks in a variety of roles within Hertfordshire including a spell with Her Majesty’s Inspectorate of Constabulary. Nick completed three years in command roles within the collaborated Joint Protective Services command of Bedfordshire, Cambridgeshire and Hertfordshire  then in 2016 returning to Hertfordshire as Director of Performance. In 2018 Nick was seconded to the College of Policing leading on the delivery of international senior leadership training and wider international policing support working across the globe including Ukraine, Sierra Leone, Cyprus, Palestine, Oman, Kenya and Canada.

Nick has an MSc in Police Leadership and Management, a Certificate in Counter Terrorism studies and a Doctorate in Business Administration. Nick’s academic expertise is in employee engagement in policing and the organisational climate necessary to engender highly engaged and effective teams.

Nick is no stranger to the Centre, having been involved for over five years as a committed member, as a Vice Chair and now as Chair.  His background allows him to span the cultures between policing and academia, offering support and challenge across all of the main Centre priorities of research, learning and education, knowledge into practice, and partnerships.

On his appointment to the role, Nick says:

I have been a keen supporter of the Centre for many years now and have always been a great advocate for the quality of the collaboration and its outputs. I am keen to build on the Centre’s strengths and to help it continue to deliver the very best in collaborative research, learning and knowledge exchange - not only between academia and the police, but directly between police partners, the wider public sector, and internationally. I think the Centre has a bright future; it is made up of high calibre people keen to deliver against ever increasing challenges across the public sector. Areas such as digital and predictive technologies, prevention, and legitimacy are all areas where policing needs to draw down on the best thinking available and these are all areas where the Centre adds huge value.

Violence Against Women and Girls: Policing, politics and practice