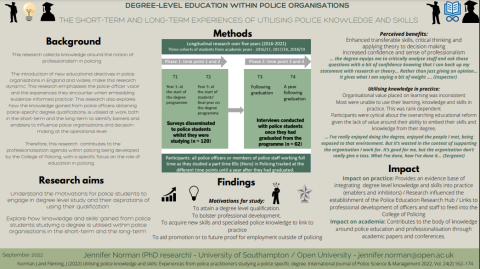 Festival delegates voted on their favourite poster during the event. Congratulations goes to Jennifer Norman, Head of Policing Organisation and Practice, who was the winner.

"I was thrilled to receive the Festival of Impact poster award. I presented some of the early findings of my PhD research which explores the experiences of police officers and staff who have undertaken a BSc (Hons) in Policing with an aim to understand how their knowledge and skills gained from the degree are used in police organisations.

All of the participants in the research worked full time for the police and studied their degree on an part-time basis. My fieldwork involved disseminating surveys and conducting interviews at four different time points (as students and as graduates), across three cohorts of police students over 5 years (2016-2021). The longitudinal nature of this work means I have been able to track changes over time as the educational reform has been implemented.  The early findings from the research outline the reasons that underpin why serving officers and staff are motivated to undertake a degree, their perceived benefits in relation to the skills and knowledge they had developed from the learning covered in the programme, and their perceptions of being able to use their knowledge in practice.

At an individual level participants felt gaining police-specific knowledge, analytical and critical thinking skills as crucial to their role. They felt more equipped in their own decision-making at work from developing these skills. As a result they felt empowered, more confident and had an increased sense of professionalism. At an organisational level, they perceived the value placed on learning was inconsistent and often lacking. Most participants were unable to use their learning and skills in practice, unless they held a senior rank. The perceived inability to integrate their knowledge in practice led to frustration and participants became cynical about the overarching educational reform.

The findings highlights the importance for police organisations to value and recognise the learning from those studying and consider opportunities to use this knowledge as a form of evidence based practice. You can read more about these early findings in this article: Norman, J., & Fleming, J. (2022). Utilising police knowledge and skills: Experiences from police practitioners studying a police specific degree. International Journal of Police Science & Management, 24(2), 162–174. https://doi.org/10.1177/14613557211064051"