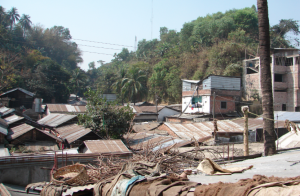 'Climate Change Makes Refugees in Bangladesh' was the headline in Scientific American in March 2009 to an article that cited farmers fleeing tidal flooding in the coastal village of Harinagar. And the tale of climate change refugees is one spread by NGOs and donors too. But it simply isn't true.

Bangladesh is a huge delta at the top of the Bay of Bengal with a spectacularly variable climate. The worst flood of the last century was in 1998, when 68 per cent of the country was flooded, including 70 per cent of the capital, Dhaka; this was only four years after the driest year, 1994, in which only 0.2 per cent of the country was flooded. In addition there were devastating cyclones in 2007 and 2009 – although none at all since then – and the rivers can shift by up to 2 km in a year, eating up farmland as they go.

It's certainly true then that every year there are environmental refugees – in bad years, hundreds of thousands of farmers lose their land and flee to the cities, as they have done for more than a century. And it's also true that researchers can fit trend lines which show that temperature and sea level are rising. However, once you have allowed for the huge variability of the country's climate, most individual Bangladeshis do not yet notice climate change. But they will.

With most of the country only a few metres above sea level, Bangladeshi scientists are all too aware of what is coming and, as a result, have taken a leading role in publicising the issue and in global negotiations such as the Paris talks last December. Saleemul Huq, for example, heads the International Institute for Environment and Development (IIED) climate change group, which he set up in 2001, and in Paris in December he was the spokesperson for the 43-nation Climate Vulnerable Forum. Hafijul Islam Khan, meanwhile, is one of the ten members of the Least Developed Countries Group Core Team, and has been responsible for Loss and Damage since 2011.

Climate change, then, does not create any new problems for Bangladesh. It exacerbates existing ones. The cyclones will be more devastating, the floods will be worse, and rainfall and temperatures will be higher. Since independence in 1971, however, Bangladesh has taken actions that dramatically respond to its challenging environment: new rice varieties now enable it to produce a food surplus; women's education has reduced the birth rate; cyclone warning and shelter systems have cut deaths to a tiny fraction of previous rates. Internationally though, few realise this because the successes have largely come from locals rather than the aid industry.

Furthermore, the country is poor and needs support if it's to do more of what it already does so well. Indeed, the idea behind 'loss and damage' in the climate talks is that industrialised countries should compensate for the damage they have already caused – and will continue to cause. But under current policies, no NGO or donor will fund Bangladesh to build on its successes. Instead new projects are demanded, preferably designed by foreign consultants, which specifically address problems caused by climate change.

The local scientists know all too well that if nothing is done to stop climate change, by the end of this century parts of their country are likely to be under water. They know what's coming and they're scared. And, because they know that in 30 years' time there will be climate change refugees, they’re forced to connive in false stories of climate change refugees now. Just as they're forced to accept donor funding and NGO projects for things they don't need or want, in the hope they can squeeze some money from them for the things they do.

Journalists who come to Bangladesh wanting stories of climate change disaster are therefore fed normal environmental disasters because local experts realise how important the publicity is. The country has some of the world's most eminent climate change experts, but it's also poor and the rich nations assume that wealth gives them wisdom. So, to try to head off the disaster of climate change, Bangladeshis are forced to play the game and say precisely what the rich industrialised countries want.

Joseph Hanlon is a journalist, a Visiting Senior Fellow in DPP, and the author of Keeping our Heads above Water: Bangladesh Confronts Climate Change, to be published by Anthem Press next year.