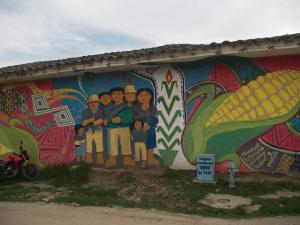 Since 2012 the Colombian government and the major active guerrilla group, the Revolutionary Armed Forces of Colombia (FARC), have been engaged in talks in an attempt to end more than half a century of conflict. In this post, I aim to introduce the history of the conflict and the potential consequences if the peace negotiations conclude successfully, but also to go beyond a purely analytical approach by providing an account of my personal experience of what’s happening in one of the regions most affected by the conflict.

The roots of the longest contemporary civil war in Latin America can be traced back to the rural uprisings of the 1920s and the unattended calls for agrarian reform. The period of acute violence known as 'La Violencia' between the 1940s and 1950s exacerbated the political confrontation between conservative and liberal parties and encouraged the creation of paramilitary and guerrilla groups. Although most of these were demobilised after the amnesty declaration in 1953, in response to the strengthening of a US-backed counterinsurgency campaign some leftist factions linked to the communist party reorganised and, in 1964, founded FARC. In the 1980s the 'coca boom' brought a substantial increase to the guerrillas' revenues, allowing FARC to pursue a strategy of territorial expansion and more aggressive confrontation. Since then two major negotiations have taken place (1984 and 1999-2002), neither of which led to agreement.

Happily, however, the latest talks have got much further than previous attempts, making a drastic reversal now unlikely. In addition, towards the end of 2014, FARC announced a unilateral cease-fire with the aim of sending an encouraging signal in the negotiations. Although this was violated and revoked on multiple occasions, it contributed substantially to improving security conditions in many areas of the country. Over the last few months, villages where violence had dominated daily life finally regained some calm.

In November 2015 I was in Colombia conducting research on ethnic and peasant rights and social conflict, with the support of a Royal Geographical Society Small Grant. Thanks to the improvement in security I could travel to the Cauca region, in the southwest of the country, and visit some of the indigenous and peasant communities that have been in the frontline of the conflict. Located on the western slopes of the Cordillera Occidental, and fought over by the army and the guerrilla, the mountains have long been a violent and strategic hotspot.

On the negotiation table in Havana, Cuba is a 6-point agenda which includes issues such as the redefinition of agrarian politics, a solution to the problem of illicit crops, guerrilla demobilisation and political participation, identification of the victims, and the modality of public approval of the agreements (whether through a referendum, as the government proposes, or a constitutional assembly, as FARC would like). The resistance of the state to implement agrarian reform was a central trigger of the conflict in the 1950s and demands for land redistribution, integral politics of rural development and peasant communities' autonomy remain at the core of FARC's agenda. Although the Colombian government's initial 23 March 2016 deadline to sign the agreements has not been met, negotiations continue to proceed. It is also clear, however, that the closer the negotiating parties get to final agreement, the greater the challenges for creating the practical conditions for peace.

The fact that a signature on the peace agreement is but one of the requirements to change Colombia's future becomes clear when I talked to community leaders. As the mayor of Toribio – a stronghold of indigenous resistance against both the guerrilla and the army – told me:

What they are discussing in Havana is the direct conflict between armed actors. But what we need is a structural, integral peace made of social justice, education, heath and rural investments. Otherwise we will only have a halfway peace.

Another major concern for the inhabitants of a region with one of the strongest presence of armed groups is the fact that the agreement might generate a fragmentation in guerrillas' ranks and files and some of the resulting factions may continue with the armed struggle. The reintegration of former combatants won't be an easy process either, and communities that for decades have been recruitment bases for FARC will be confronted with a situation in which victims and perpetrators will have to live side by side.

Stories of violence and war populate people's discourses and even their perception of the landscape. As I walked around, people constantly pointed out where members of their community were killed, or where the guerrilla used to camp until just a few months ago. For some reason, probably connected to action movies and stereotyped readings, my imagination had always placed guerrillas in an exotic, remote forestland, hidden by vegetation and far from inhabited land. What I now realised was that some of the most active frentes of FARC have been moving across populated and highly cultivated hills, camping a few miles from villages, buying supplies at the local shop and conducting military actions in a crowded market square on a Saturday morning.

Point 4 of the negotiation agenda – concerning illicit crops – will be crucial for the region. Bright green coca fields and greenhouses lighted 24/7 for marihuana cultivation are easily spotted on the mountains surrounding Toribio. Although we are only a few hours' drive from Cali, the third-biggest city of Colombia, the state has little presence. Pick-ups full of harvested plants are parked along the main road, while in some villages the smell of burned marihuana tickles your nose. Just before my visit, the Colombian Congress had passed a law to legalise soft drugs and I expected people to be pleased. Instead, the general perception was that legalisation will shift the economic benefits to big corporations and landowners, while communities and small peasants will lose a large part of their income. The support of both the government and FARC for drug legalisation fails to provide alternative solutions for local communities whose economies significantly relies on illicit crops.

My journey showed that the peace process has brought a period of calm and relative security. At the same time, however, it's clear that any lasting peace will need to deal with longstanding issues of poverty and rural development, and that local communities will have to undergo the slow process of learning how to live in peace again after 50 years of conflict.

Lorenza B Fontana is an associate researcher in the OU's Faculty of Social Sciences and a Marie Curie Research Fellow (funded by the EU, and hosted by Harvard University and the OU). She has held visiting positions at EHESS, Paris, at the University of Cape Town, South Africa, at the University of Palermo in Buenos Aires, Argentina, and at the EAFIT University in Medellin, Colombia. You can keep up to date with her latest research on Twitter.