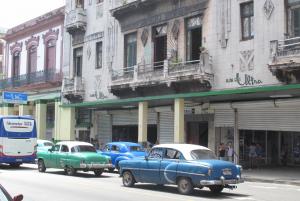 Last year I wrote about the ways in which Cuba’s capital city might just be able to avoid gridlock if – or when – car ownership increases from its present very low levels. Although Havana is a particularly interesting case in term of transport engineering and what the future might hold for its streets, for now I’d like to concentrate on some of the ways that inequity is creeping into its transport landscape and creating issues that could be difficult to resolve.

Currently, Havana is characterised by a very low automobile population (estimated at around 40-80 vehicles per 1000 inhabitants), high levels of bus use and walking – nearly 60% of trips are made on foot – and unmet overall demand. Much of this unmet demand is due to a lack of replacement bus parts or other issues directly linked to the continuing economic blockade, which means that each day a significant number of buses are unable to operate.

Although economic growth has been arriving in Havana in fits and starts, last year’s announcements by Raúl Castro and Barack Obama that they would continue efforts to normalise relations between the two countries gave a significant boost to the tourism economy and an influx of capital to the city. However – and here’s the rub – the increased flow of money also led to workers in the tourist industry being able to access more goods and services such as taxis, dining out, or even getting an electric scooter brought in from Panama.

While tourism undoubtedly opens up possibilities for some members of society, others are left worse off. Indeed, the leakage of capital into the tourism workforce has the potential to create greater inequalities within what is an equitable society. Much of this equity derives from the fact that the country still uses two forms of currency. One allows Cubans to purchase basic foodstuffs and household items using the peso at a heavily discounted level while, at the same time, the ‘market’ economy runs in convertibles (the currency tourists normally use), with an exchange rate of about 20 pesos to one convertible. (As an example of the equity achieved, a single bus journey currently costs 0.40 pesos – just under 1.5 pence – per trip.)

However, as incomes increase from the current average of 50-200 pesos per month, there is a distinct possibility that the number of cars could also rise significantly. Indeed, the last two to three years have already seen many old vehicles brought into the city from outlying regions. Simply put, once monthly incomes reach about $1000 US dollars, if Cuba follows a car-ownership pathway and if cars are readily available, then growth is likely to follow.

With this in mind, I’d therefore like to consider two – very simplified – scenarios for the future of Havana’s transport systems. In the first, Cuba’s automobility system takes off towards a car-centric city landscape. As incomes rise, rapid growth occurs and with it a major shift away from public transport systems by those who can afford private transport. The only way to restore faith in public transport systems would be to improve services through the introduction of a bus rapid transit system, or even metro or tram services. Although this would deliver much-needed seats, it would also require investment over a considerable period of time.

The second scenario, however, is one in which Cuba adopts a policy model of restrained or sustainable growth, one mixed with guidelines about automobile ownership and usage. The new framework could draw on the example of cities such as Singapore (approximately 150 cars per 1000 people, coupled with congestion pricing) and on practices found in Denmark – which has some of the highest tax on purchasing cars in place – and in the Netherlands and Switzerland, both of which have introduced policies which help to curb car use in cities and support train commuting or car-sharing.

In fact, many cities have already started to turn their backs on the car and embrace such systems – partly due to their potential to generate higher revenues. And, although the car remains deeply entrenched in city landscapes and the human psyche, there are at least some small signs that a post-car future is becoming more likely.

Wouldn’t it be wonderful, then, if Havana could leapfrog autopia (or autogeddon)? Indeed, with the right mechanisms for community involvement and an emphasis on collective mobility and quality of life, it might even become a beacon of a sustainable and more equitable future from which we could all learn. 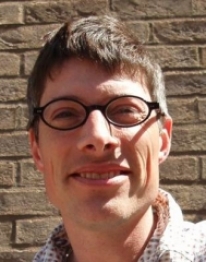 James Warren is a Senior Lecturer in the School of Engineering and Innovation. He is currently working on a city-wide mobility/public transport system study in Latin America in conjunction with UCL.

I wonder whether there is another model of transportation which could unfold....? My experience of other Caribbean countries such as Guyana, Barbados and Trinidad & Tobago is that governments have imposed very high taxes on car imports, but completely liberalised public transportation, so you have a proliferation of privately run small vans that have spontaneously self-organised to create a pretty efficient and sustainable private/public urban transportation system.

I doubt Cuba will follow any other Caribbean pathway of development – they're simply too different. Whatever they come up with, it will be very Cuban.
It's also much, much larger than any other Carib island. In fact globally it's the ninth-largest island nation after Britain. Havana alone has 2.4 million inhabitants – only 6-8 other small island states have over 1 million. This means it acts more like a city-state/strong attractor – a little like Singapore, but without the density or the money! – but at the same time its size makes it more like Florida in land and population.
That's why Cuba often gets discounted. It simply doesn't fit neatly into Small Island Developing States (SIDs) or other UN categories.