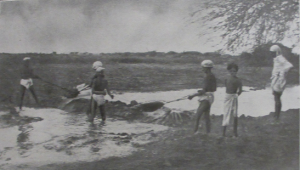 Colonial rule involved the attempt to produce new landscapes and socio-natures based on an absolute conviction that it was desirable for the conquered lands to grow more export crops. My current research on the district of Dharwar in the nineteenth century (nowadays part of the southern Indian state of Karnataka) explores the encounter between a contested colonial government's attempts to create territorialised spaces conducive to the growth of 'economic' crops, in particular cotton, and a vibrant local socio-nature, made up of both human and non-human (plants, animals, soils, climate) actors, which often responded in unforeseen and subversive ways.

In the 1840s,  a major drive to acclimatise and grow American cotton in India was launched under East India Company rule with the aim of reducing, and ultimately replacing, the Lancashire cotton industry's dependence on the United States for raw cotton supplies. Particularly high hopes were placed on Dharwar as one of the main sites for this experiment, on the grounds that its climate was held to closely resemble that of the cotton-growing districts of the American south.

However, colonial officials had misconstrued the local climate which was characterised by uncertain and scanty rainfall patterns. In this dry agrarian landscape, the American cotton plants, grown in a pattern of intensive mono-cultivation without crop rotation, failed to thrive. Instead, they became prone to onslaughts from dry winds, pests, bugs and caterpillars, producing very poor yields and leaving local peasant cultivators unimpressed by the brittleness of this foreign cotton in comparison with the indigenous variety they were accustomed to grow. The American 'experts' who had been brought in to conduct the cotton experiments soon admitted defeat, concluding that the American system of cultivation was not suitable for India and admitting that due to their knowledge of the climate and of the capabilities of the soil, local peasants' farming skills were far superior to their own.

The peasants of Dharwar viewed cotton as a subsidiary crop. In a challenging climatic environment, they prioritised the production of food, based on the cultivation of jowar (Indian millet). A rain-fed, eco-friendly crop, jowar and its products served as the main food for the local population, with the grain being broken down and cooked into little cakes, and the straw providing the best fodder for their cattle. Peasant cultivators used their knowledge of local soils and microclimates to optimise production of this crop as they were aware that it could withstand short-term droughts, remaining dormant in moisture-deficient conditions and then resuming growth with the arrival of more favourable weather.

As a result of their skill, they were able to grow 18 different varieties of this foodstuff, all maturing within three to four months of sowing. They were also aware that the deep moisture-holding capacity of the soils enabled the hosting of jowar and the local Kumta cotton in a complementary pattern of rotation. Like jowar, Kumta cotton played a significant part in sustaining household livelihoods, with peasants careful to put aside the best of the harvested crop for home spinning and local weaving resulting in the production of clothes for regional consumption, rather than for export markets. Its dry stalks were also a cheaper alternative to firewood as fuel for cooking and heating, while the seeds and leaves were used as food for cattle and sheep respectively.

In the hands of local cultivators, American cotton did eventually achieve a presence in Dharwar, most notably during the period of the American Civil War, when India temporarily became Britain's main cotton supplier. However, by the 1870s, widespread deforestation in the regions around Dharwar had accentuated the dry climate, with particularly devastating effects on American cotton which had greater moisture requirements than Kumta cotton at crucial stages of plant growth. Moreover, in the light of increasingly erratic rains, peasant producers reinforced the prioritisation of jowar food grain cultivation, and by the 1890s Britain had virtually disappeared as a market for Indian cotton.

British attempts at transforming the cotton landscapes of Dharwar were confronted by a range of socio-natural forces that colonial knowledge never quite got to grips with, and which therefore resisted and limited commodification. The entwined social and natural worlds of peasant crop choices, cultivating knowledge, climate, rainfall and soil presented formidable barriers to colonial cotton designs. Challenging 'commodity fetishism', the peasant cultivators of Dharwar persisted in maintaining the production of locally sourced food and cotton so as to meet the essential needs of the regional population. An anti-commodity sensibility pervaded the peasant cultivators’ relationship with their agrarian environment which was nurtured as the material source of their livelihoods rather than, more narrowly, as land primarily suitable for commodity production for the global capitalist market. They can be seen as the historical forebears of contemporary farmers in the global south engaged in the food sovereignty movement who are defining their own food and natural resource priorities appropriate to their unique ecological and cultural circumstances.

Sandip Hazareesingh's research combines social history with historical geography and he is currently focusing on the interactions between food/cotton production and climate change in colonial western India. He is Director of The Ferguson Centre for African and Asian Studies as well as Principal Investigator on an AHRC-funded digital history project, Commodity Histories.