Doing research that brings about change for participants 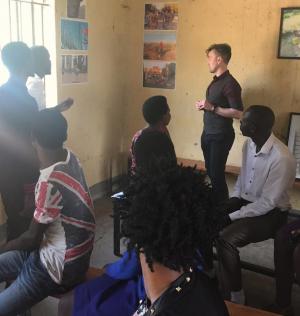 Craig Walker gained his MSc in Development Management in 2010, while working for the UK government’s Department for Environment, Food and Rural Affairs. He went on to do a PhD inspired by his study of TU879 War Conflict and Development, and became a full-time academic researcher in Development Policy and Practice at The Open University. Now poised to resume his career outside academia, he talks about what he has learnt, in particular his shift to ‘responsible research’.

I had never thought of doing a PhD, but as I was finishing my Masters an email came from DPP about a fully-funded PhD available through the Robert Beevers Memorial Fund. Applying for it was leap of faith.

My PhD proposal was based on my study of the War Conflict and Development module, which really shaped my thinking. I wanted to look at the causes of postwar violence – just because a peace agreement has been signed does not mean the violence stops.

The usual explanations for this are that political elites renege on the peace agreement, or that war has embedded violence socio-culturally in society, so you see increases in domestic violence or organised crime. I was interested in another possible explanation.

Civil wars are usually between large identity groups so my research explored intergroup relations in the post-war period – how identities were being socially and politically constructed as a way to look at group dynamics connection to ongoing violence.

I spent three months in Mozambique and six months in Nepal, working with conflict-affected communities. I knew that peacebuilding was a research area prone to oversaturation and ‘participant fatigue’ – as researchers can tend to parachute in, collect people’s stories and leave – but my experiences left me with a real sense of how research can equate to change in participants’ lives.  I became more interested in the decolonising and responsible research agenda.

DPP is on a very good trajectory for having conversations around these issues, because it has an ethic of responsibility to the community. What I have learnt over the last four or five years is a really strong sense of using participatory research methods, and their potential for the empowerment of the communities, to bring about some kind of positive change, And I’ve actively tried to build this into my recent research in different ways.

My project working with young refugees in Uganda used PhotoVoice to support their ambitions – as a result of the project they have come together and formed a youth group which is trying proactively to shape a role for youth and be seen as a force of good in the settlement.

Video by Daniel Kavimba, a young Congolese refugee in Kampala, showing life during the pandemic

And with trans women in Mozambique, the aim of using PhotoVoice was not just to take nice photos but to hold exhibitions which could influence policymakers, and explore ways the research can support the emerging trans movement developing in the region.

I’ve had so many opportunities to work on interesting projects in DPP – such as our Migration for Inclusive African Growth study and the Decolonising Peace Education in Africa project which I’m particularly interested in.

Owing to changes in my personal circumstances, I will be leaving academia and making a segue back into government or a development-focused charity, maybe working with refugees or victims of conflict in the UK.

I feel I can go back in with a much more rounded understanding of the use of evidence, and how to make that connection between academic research and policy. My thinking has been shaped in no small part by the conversations I have had with academics in DPP. I feel very lucky and privileged to have had the experiences I have had.

Image (top right) shows young refugees sharing photos they have taken as part of PhotoVoice project, to see if they could bring the youths of different nationalities together