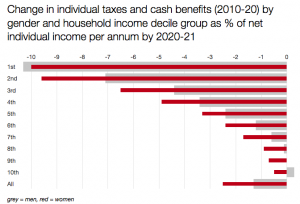 Women have borne the brunt of government austerity policies since 2010. Cuts to spending on services and social security have a disproportionate gender impact because women rely more on these services, benefits and tax credits than men do. It is therefore ironic that the UK is set to announce another budget that will do little to redress the imbalance on International Women’s Day, a day when people across the world push for gender equality.

Cuts hit women harder because women are more likely to use public services, and more likely to work in the public sector. They are more likely to do the unpaid work to compensate for cuts in services – such as caring for children or older family members – with consequences for their own employment and earnings. Benefits and tax credits constitute a larger share of women’s incomes due to their care-giving roles. Plus, it is indirectly detrimental for women, as caring causes greater risk of poverty over the course of someone’s life. Therefore, rolling back the welfare state will reduce efforts to achieve gender equality.

At the same time the government has cut taxes in a way that disproportionately benefits men. For example, successive increases in income tax thresholds means that most of the £20 billion of annual tax revenue that will have been lost to the Treasury by 2020-21 will go to men, as they earn more than women. The other two big tax cuts have been the £13 billion of corporation tax rates cuts (the majority of shareholders and company directors are men) and the £9 billion freeze to fuel duties also benefit men as they drive longer distances than women.

Under the UK government’s Equality Act of 2010, the Treasury is obliged to have 'due regard' to the impact of its policies on equality. Yet it has repeatedly failed to publish meaningful analysis of tax and spending policies. It has been left to organisations like the Women’s Budget Group to carry out the sort of impact assessment that should be the responsibility of government.

Analysis by this group and Landman Economics has shown that women will be hit twice as hard as men by changes to fiscal policy since the then newly-elected Coalition budget of June 2010. Their analysis projects the impact of policies announced since 2010 to 2020, comparing net individual incomes by 2020 under these policies, against what these incomes would have been if the policies in place in March 2010 had continued.

It found that women would lose more income than men across the ten deciles of income distribution (as the chart at the top of this post shows). Women in the second poorest group would, on average, lose up to £1,800 a year by 2020-21 from tax-benefit changes, equivalent to about 10% of their net income (in real terms, that is adjusted for inflation). And the poorest black and Asian women lose the most because they tend to have lower incomes and larger families – and so are more sensitive to cuts.

If cuts to public services are added, lone mothers (who constitute 92% of lone parents) would lose almost £9,000 a year (in real terms), 18% of their standard of living, largely due to cuts to the Universal Credit benefit payment, spending on schools and on childcare services. Single female pensioners are set to lose 10% of their standard of living – despite increases in their state pension – mainly due to cuts to social care funding.

So the Treasury is neither doing a great job at redressing gender inequalities in its control of the country’s finances, nor at redressing the finances altogether, since public debt is still forecast by the Office for Budget Responsibility to keep rising as a proportion of GDP for several more years.

A Country That Works for Everyone?

If the objective is really to build 'a country that works for everyone', as Theresa May proposed in her first speech as prime minister, then austerity policies need to be replaced by an expansionary plan. The government should invest public money in both physical and social infrastructure projects, including high-quality healthcare, child care, social care and education services.

This is not only necessary to sustain an economy (as the population relies on these services to reproduce itself and maintain or improve its quality of life), there is also ample evidence that it is economically efficient. It creates more jobs than equivalent investment in physical infrastructure, and more jobs for women. Unlike physical infrastructure projects, it also reduces women’s caring constraints to participate more in the labour market.

A recent study for the International Trade Union Confederation showed that investing 2% of GDP in the care industry would create twice as many jobs compared to equivalent investment in construction. Moreover, in the mid-term (15 years down the line) public debt and deficits would be reduced more effectively through these kinds of expansionary policies than through austerity.

Research also shows that if governments invested in high quality, free universal childcare, this would result in better childcare provision, higher tax revenue and a shift from spending on benefits to spending on public services. It would thereby achieve a triple objective of better paid and more secure jobs, reduced gender inequalities, and sufficient tax revenue.

Investing in public services and in a decent social protection system is the way to achieve a country that works for everyone. Equal opportunities, especially for women and disadvantaged groups, require a level playing field that the market and families cannot provide for themselves. A sustainable economy demands no less. 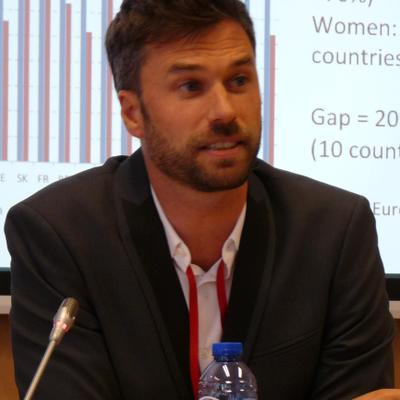 Jerome De Henau is a Senior Lecturer in Economics with research interests in economics of gender, labour and household economics, fiscal and social policy. He tweets from @jerome_dehenau. This  article was originally published on The Conversation and we are grateful for their permission to reproduce it. Read the original article.