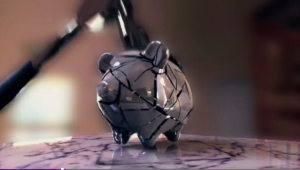 A report that was billed to transform the UK's retail banking industry has been criticised for not doing enough to protect customers. The Competition and Markets Authority report was two years in the making and is geared towards improving competition and the products on offer for individuals and small businesses.

But the government watchdog puts the onus on bank customers to improve market conditions. It said their lack of engagement with the market 'weakens banks' incentives to compete' and contributes to the costs involved for challenger banks to gain a foothold in the market. Therefore its package of remedies focuses heavily on measures aimed at stimulating consumers to shop around and making it easier for them to switch. Even with the new technology it proposes, this will be easier said than done.

Central to the reforms is a requirement that banks make their computer systems accessible to trusted third parties so that, with customers' consent, their banking data can be transferred and used to drive new online services and mobile apps that compare the best banking deals and recommend switching when cost savings are identified. The aim is to have this part of the remedy up and running by 2018.

There are some obvious concerns: the security of data passed to third parties, the possible cost of these new services, and the fact that older generations and rural communities in particular often have no or poor internet and mobile access, so are not necessarily in a position to benefit. A further barrier may be that consumers are simply overloaded with calls to shop around.

A common cry from regulators of everything from gas and electricity to broadband and insurance is that consumers must engage more actively to make markets work. From all sides, you are urged to shop around and switch regularly to persuade providers to improve quality and cut prices.

But research I've conducted suggests how unrealistic it is to expect households to shop around for every service they use. I looked at the shopping and switching habits of more than 1,000 consumers for 12 common household and financial services, including energy, communications, banking, savings and credit cards. Most used ten or 11 of these services, but at best had shopped around for fewer than half (the blue line in the chart below).

Only a tiny proportion of households shopped around for every service they use (the green line in the chart). Households that shopped around prioritised their car, buildings and house insurance, followed by their gas and electricity provider. They were least likely to shop around for their bank account.

Across all services, the research found that households who had not shopped around tended to overestimate the time and difficulty of the task. But even among households who did shop around for a bank account, one in five found the process took more than a day and nearly one in ten found the process difficult. So part of the challenge facing regulators is to improve, and instil greater confidence in, the industry's current account switching service (CASS) – something the CMA and the industry is trying to do.

My research showed that, for all types of household and financial services, most of those that did not shop around tended to think that all providers offer similar deals and that shopping around would save too little to make the chore worthwhile. The new third-party services that are being proposed may help to make banking differences more visible. In addition, the CMA will require banks to gather, publish and share data on the quality of their services, including whether existing customers would recommend their bank to friends, family and colleagues.

Another finding of my research was that households were most likely to shop around for insurance products. An important feature of these products is that they are annual contracts so there is an automatic, regular prompt to shop around. The CMA measures will try to mimic this for bank accounts by requiring banks to send existing customers prompts, suggesting that they shop around for a new account. These may be on a regular basis and also triggered by events, such as your local bank branch closing down.

While the CMA measures aim to tackle the particular shortcomings of bank customers that it has identified, they nonetheless overlook the wider context of households potentially being overburdened by multiple calls to become active and engaged consumers. My research suggests that, as the number of services you use increases, there may be resistance to taking on yet more shopping around.

Attempts by the government to get people to add bank accounts to this list may be an especially tough challenge and there may be a danger that shopping for bank accounts reduces the time and effort you are able to devote to shopping for other services. Regulators need to wake up to the fact that consumers simply may not be willing to take up the workload of driving the demand side of competition across multiple markets for household and financial services.