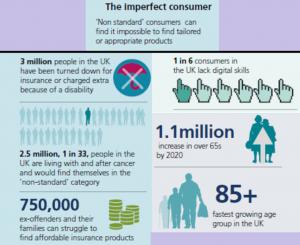 Imagine not being able to go on holiday because you cannot get travel insurance or it costs more than the trip itself because of your health. Or what about being denied free car insurance with your new car or turned down for a mortgage because you're too old. Then there are a whole host of banking services that aren't easy to access – from sorting out your current account to managing your pension and savings – if you're unsure about the internet or cannot afford to go online.

These are common experiences for millions of people across the UK who are denied access to everyday financial services because of disability, disease, age, lack of digital skills or because of where they live, and are the findings of a paper I co-authored, published by the Financial Conduct Authority, the major UK regulator.

In the course of the research, we came across numerous cases. For example, one man in his 30s and working for the armed forces was refused an extension to his mortgage. The reason was that it would take the term past the age of 60, the compulsory retirement age for the Armed Forces, even though he intended to work longer and his state pension would not start until the age of 67.

In another case, Alison was living with terminal cancer and was given two to five years to live though was in relatively good health. When arranging a holiday, she was turned down flat by many travel insurers while others said they would call her back but never did. In the end she went with the only firm that would cover her, paying £1,300 for insurance for a ten-day cruise in Europe.

Our research suggested that problems like these are only likely to grow as more services shift online and use automated processes that are not set up to deal with non-standard, 'imperfect' consumers. This doesn't even include people who live in rural areas with few bank branches and inadequate broadband and mobile reception, or the 17% of over-55s who have no access to the internet at all.

Many of us will have experienced the frustration of online systems that don’t quite fit our real-world circumstances. For 'imperfect' consumers, the problem is far worse. Caught in a maze of impersonal processes, with decisions made by computers instead of people, there are those who are denied credit because their data is 'thin' after working abroad for a number of years or on becoming newly widowed or divorced, with no financial products in their name.

In addition, as the population ages, more will bump up against blanket age limits and the proportion of people with health conditions is likely to rise.

The numbers for different groups in the table at the head of this article are stark and measuring the scale of these access to financial services issues is difficult. Many people turned down for a product do not complain, so do not appear in complaints statistics, and firms do not keep data on how many would-be customers they turn away. Other consumers self-exclude, not bothering to apply because they expect to be turned down, often based on bad experiences in the past.

Since the government abolished Consumer Futures (originally the National Consumer Council) in 2014, the UK no longer has a statutory consumer body with a remit to research these kinds of issues and without proof of the scale of a problem, regulators, government and firms are often reluctant to act. The sad irony is that these consumers are shut out of the system and therefore cannot communicate their needs or wants to firms designing and delivering basic products like pensions and mortgages.

Access issues are especially important. The cradle-to-grave welfare state is a thing of the past, if it ever really existed. There was, at least, a belief that social housing, the NHS and state benefits would catch the homeless, the sick, the frail and the elderly, as part of a caring society.

These days, we are all expected to look out for our own financial well-being, sorting out our own safety nets, secure places to live and viable retirement. But being denied access to financial services means being shut out of modern life and put in a very vulnerable situation.