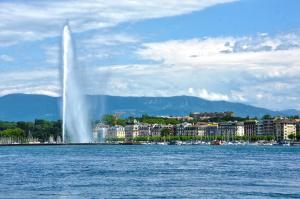 This blog is written by Jessica Giles, Barrister and Lecturer in Law at The Open University.

What might a visit to CERN (the European Organisation for Nuclear Research in Geneva), the Museum of Modern Art, a UN diplomat, Saint Peter’s Cathedral in Geneva and the World Conference on Online Learning in Dublin have to do with interdisciplinarity?

Interdisciplinarity was epitomised centuries ago by Leonardo Da Vinci. While many of us would be overjoyed to reach world-class standard in any one discipline, Da Vinci not only did so in several disciplines, but was something of a prophet of his time. He designed a tank more than 400 years before it was championed by Ernest Swinton and William Hankey (as a reaction to trench warfare in World War I). He also designed a mechanical knight and a workable forerunner to the diving suit. He conceptualized the parachute, glider, helicopter and landing gear, concentrated solar power, a calculator, a rudimentary theory of plate tectonics and the double hull, to name a few of his ideas.

Academic literature more recently describes interdisciplinarity as the bringing to bear of several disciplines to integrate and design an approach to solving problems unsolvable with a single disciplinary approach. Interdisciplinary study can be taught using a lifeboat model where tutors from various disciplines are placed together to collaboratively tutor the module and must work together to survive and bring their students home(!).

So, when I found myself at the end of August, sitting on a bench at the end of a fantastic day spent touring CERN (yes we got the Golden ticket and were given a tour by a particle nuclear physicist) with my teenage daughter and her friend, looking forward to a visit to MoMA, followed the next day by a morning sketching in the Cathedral listening to a baptism service in French, and an afternoon chatting with a UN diplomat on law and religion matters, I reflected on what it was that created the thread through this experience and how interdisciplinarity had informed the success of each.

As I recalled the wall full of portraits of male scientists at CERN, my initial thought was that perhaps it was encouraging women leaders, whatever their skills, to come together to demonstrate what it was that they could contribute to resolving pressing global issues – my daughter’s friend had decided by the end of the day that she would like to come and work at CERN when she had finished her studies and my daughter that she would potentially like to come to university in Geneva. There was for me, however, an additional thread that ran through these varied experiences and that was that what we experienced and engaged with was possible because we are protected by fundamental rights frameworks giving us freedom of thought, conscience and religion and the freedom of expression. It was this freedom that gave Calvin the ability to flee France and practice his beliefs in Geneva; gave artists the freedom to express themselves in the modern art we enjoyed in MoMA; the scientists the ability to develop the outstanding collaboration that existed in CERN; and facilitated the collaboration between myself and my UN diplomat friend.

So, was the golden ticket just for the day at CERN, or like Charlie and his trip to the Chocolate Factory had I been given something life-changing? The privilege of working within an institution that facilitates interdisciplinarity, that supports the exploration of ideas that break new ground and helps me to conceptualize ways of making the world a better place and provides a platform for doing so? That might be it – but I think for me my golden ticket is the potential for interdisciplinary collaboration. This was the biggest take home for me in respect of each of the visits I made. CERN (with its phenomenal public impact and engagement), the UN, the seat of the reformation in Switzerland, the World Conference on Online Learning in Dublin, modern art - they were about individuals engaging in an interdisciplinary collaborative manner to address issues of our time with a view to doing something greater through that collaboration than they could do alone. That for me is also the greatest benefit of interdisciplinarity – it forces us out of our comfort zones and into working with others in a dialogical way for the benefit of others. Indeed, it seems to me like we all have a golden ticket offered to us, we just need to use it and we will all get a life-changing trip to the Chocolate Factory.