Encounters with the real lived spaces of the TESS-India MOOCs 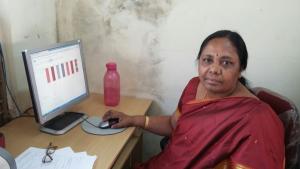 I initially joined the TESS-India project team to help develop the materials for the 2016 Massive Open Online Course (MOOC). Whilst working in the Institute of Educational Technology at The Open University I had been involved in evaluating open online courses for many years, so it was hoped this insight from analyses of participation, survey responses and participant interviews could help the team in developing their learning design. I have since been involved in running MOOC training sessions in India for state representatives and the lead team for the Hindi MOOC, have contributed to project evaluation and dissemination to senior state officials, and, more recently, worked on a potential next step involving a combination of pre-owned and emerging technologies.

The 2016 TESS-India MOOC was presented in English and then less than a year later in Hindi. The course proved to be a resounding success in respect to numbers: not only did over 40,000 educators - mainly based in India - register, but the completion rate exceeded 50%. For a MOOC this is remarkably high. Satisfaction was also excellent (98% rated the Hindi MOOC very good or good) as was the belief the MOOC would benefit personal professional practice. Reasons for this success include how well the MOOC was integrated into existing project activities, an effective building of local logistical infrastructures, translation into Hindi for the second presentation, and the intention to use the MOOC as an ‘event’ that would introduce, guide and support teachers in their use of the OER resources produced by the project. It was only as the project progressed that the value of these elements became apparent.

The focus provided by the MOOC helped engage and enthuse educators at all levels of the education system from state officials and project nominated state representatives through to college directors, headteachers, teachers and trainee teachers. This helped provide an endorsement for the MOOC in the eyes of those taking part and to build the practical network within which local contact classes were organised. These contact classes provided a real space for MOOC participants to meet - often to attend a session based on the MOOC activities, use an internet connection or meet with other participants. The fact that hundreds of these classes were held across many states demonstrates the organisational reach and the breadth of impact.

Following the MOOC, we undertook detailed analysis of pre- and post-survey responses. These of course, like analyses of many other MOOCS, provided a wealth of interesting insight and even some surprises. There have been other project accomplishments since. For example, last year the state government of Madhya Pradesh – a state the size of the UK – made available funds to buy every teacher an SD card for loading with TESS-India resources. This literally puts the TESS-India OER into the hands of thousands of teachers. To take another example from the same state, following the success of the MOOC over a thousand TESS-India metal badges have been made and distributed to those who completed the course. At a time when effort is being put into awarding digital badges in real classrooms it is intriguing to see a case where the process is reversed – real badges awarded for digital learning.

Of course, when reporting substantive headline figures one must also remember that each login, each survey response, each SD card inserted into a phone, or each badge pinned to a shirt connects through to an individual story. And for open, online distance courses that take place thousands of miles away from the places they were written, it is usually these stories that are so difficult to fully capture or contextualise.

So little did I know that a year after joining the project I would be travelling to India and would have the opportunity of interviewing face-to-face some of those participants of the MOOC; participants who a month earlier I had known only as rows of data in our SPSS spreadsheet. The most enjoyable, although logistically hectic, parts of the trip were the visits to teacher training colleges located in three towns in Madhya Pradesh. These visits were intended to help the project learn more about the impact of the MOOC on staff and students: how it was received, what it had meant to participants, and the subsequent impact on their practice as teachers and on their working lives. They also served to help connect the virtual presence of The Open University in the MOOC with a very real presence in their college.

It was during this visit that I got to appreciate the importance of the small but significant impacts that the MOOC, and the project more widely, was having on teachers and trainee teachers. Take for example one teacher trainer working in a town near Bhopal. During a tour of the college we were shown his TESS-India MOOC certificate of completion – proudly on display on his desk amongst an assortment of cuttings and other documents under a protective sheet of glass. In our interview later he talked about having brought a laptop and how he had used this to provide a local hotspot for students to get online and study the MOOC.
In another teaching college, a notice board in the main foyer to the right of the double glass doors and opposite the principal’s office had been given over entirely to information, guidance and timetables in Hindi about the MOOC. This material had all been prepared and localised by staff. It would be too much to expect all trainee teachers had engaged in all this material, but data shows very many did. Other interviews revealed teachers for whom the MOOC was their first experience of online learning, of peer review, even of registering for an email address. Some teachers mentioned a specific resource or idea which had been their take-away or inspiration from the course.

This locally supported or coordinated engagement with the OER and MOOC was repeated many times. This is partly how one builds to those headline figures of 40,000 registrations and just over 50% completion. Moreover, these examples serve to demonstrate how the project and its outputs acquired meaning to those involved as well as utility.

Our research into the nature of what the experience has come to represent is ongoing. However, at the state level, the project has already had a major impact on wider strategy. In Madhya Pradesh the state, in consultation with the team in the UK, has undertaken a mapping of TESS-India OER resources to the new national school improvement programme called Shaala Siddhi.

The education event that TESS-India achieved in 2016-17 managed to effectively combine virtual and real infrastructures, resources and networks; linking together virtual and real spaces. It was a driver for making visible the great range of professional development resources for teachers that the project has produced, and for encouraging engagement with them. What set this apart from other MOOCs I’ve been involved with was being able to travel and talk to the participants and organisers and to see some of the places, and solutions, to learning online that were found. This provided some amazing and unexpected insight. Indeed, much more of this kind of research is essential to understand the role and impact of open and online learning. It also reminds us that every online, virtual learning experience still happens somewhere.

Dr Simon Cross is a Lecturer in the OU's Institute of Educational Technology. TESS-India is a £10M UK Aid Funded Project led by The Open University.

This blog is also available in Hindi.