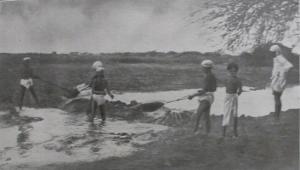 Dr Sandip Hazareesingh and collaborators from the Indian NGO Green Foundation were invited to present the research findings of their GCRF project Changing Farming Lives in South India, Past and Present at a conference on Mobilising Global Voices: Perspectives from the Global South, held at the House of Commons on 27-28 February 2019. Read Dr Hazareesingh’s blog below:

This event was jointly organised by UKRI-AHRC and the International Development Committee (IDC) of UK Parliament. The conference brought together development scholars and NGOs from the Global South, UK-based researchers, and UK Parliamentarians. Its main objective was to share ideas about achieving greater visibility and inclusion of globally diverse voices and perspectives with a view to improving UK Government (DFID) policy-making.

The IDC’s main role is to scrutinise the work of DFID by providing information and perspectives from a wide range of sources so as to ensure that policies are compliant with the UN Sustainable Development Goals. As much of the IDC’s current focus is on monitoring and evaluating DFID’s work in the areas of Forced Displacement and Climate Change, its members were given a unique opportunity to hear first-hand accounts of collaborative north-south research projects on these themes using Arts and Humanities approaches. These methodologies included oral history, story-telling, street theatre, participatory video, creative writing, used by projects researching subjects such as Local Community Experiences of Displacement from Syria; Traditional Knowledge and the Revival of Millets for a Changing Climate in South India; Living with Typhoons and Insecurity in the Philippines; Resilient Pastoralism in Mongolia and Kenya.

Members of both IDC and AHRC expressed great delight at the information and insights provided by the presentations and voiced the hope that this event heralds a continuing and inclusive dialogue between researchers in both north and south and their parliaments. However, many of the researchers present expressed scepticism about the effectiveness of such events in changing or improving government policies. Indeed, some invited delegates from the south had been refused visas to travel to the UK. Personally, I made the point, to loud applause from the floor, that unless the Home Office’s ‘hostile environment’ immigration policy is reversed and visa applications from the south approached with a radically different mindset, ‘voices from the south’ will remain marginalised and hopes for a deepening north-south dialogue on development voiced by the conference organisers might well prove unsustainable.