Refugee – host relations: the building of peace through everyday interaction 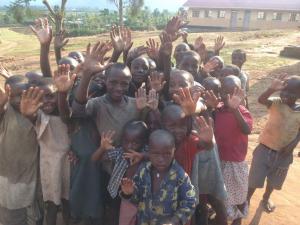 Settling refugees requires land and can put pressure on local services and resources. If these have to be diverted from, or shared with, the surrounding host communities it can create competition and tension – but does this necessarily create conflict?
The nature of relationships between refugees and host communities is gaining greater attention in recognition that many refugees don’t live in fenced camps, and so are interacting with local nationals on a daily basis. Most of the work to date, though, starts from the premise that conflict is expected and so focuses on conflict reduction and violence prevention.
I visited a refugee settlement in Uganda last month along with two Ugandan NGOs as part of a fact-finding visit exploring the potential for setting up a study that would consider the opposite – not what causes conflict between refugees and the local communities, but what generates peaceful relations.
As you drive into Oruchinga there is nothing to indicate you are entering a refugee settlement, just a series of small villages dotting a valley floor. It was established in 1959 for Tutsi fleeing ethnic violence in Rwanda, but because of ongoing tensions and wider political unrest in the region, it has grown to include fifteen villages housing over 8,000 refugees - not just from Rwanda but additionally Congo and Burundi. There is a fluidity with which the refugees interact with the local Ugandans, sharing schools, hospitals and market places and, over the past sixty years, there has been a lot of intermarriage.
While there is no doubt that conflict happens, what was quickly apparent was seeing a sense of normality with which refugees and host communities interact. In fact, talking with people, we saw many ways that refugees cooperate with the nationals for mutual benefit. I spent an afternoon in the central marketplace which is shared with several Ugandan villages. There we got chatting to a 15-year-old Ugandan boy who had been employed by some Congolese farmers to sell their crops. The arrangement had come about because the farmers were having a difficult time bartering the sale of their tomatoes because they weren’t proficient in the local language. As a result, the Congolese are getting a better price than before and the Ugandan boy is earning some money to pay for his school fees.
This is just one example of the cooperation we saw, but there are many more. We are looking forward to researching further how these relationships have developed and what they mean for peaceful cohabitation between refugees and hosts. If you are interested in finding out more about our work, please feel free to contact me.
Dr Craig Walker
Research Associate, Development Policy and Practice